For Trudeau, Feminism is Just a Brand 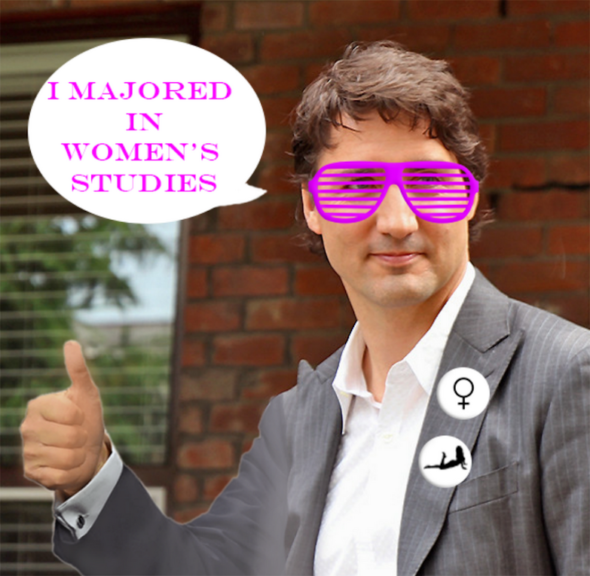 Feminism got a serious rebranding in the early 2010s. In an attempt to demystify gender politics and dispel harmful stereotypes, there was a widespread push to redefine what being a feminist means.

This rebranding simplified feminist ideology, boiling it down to essentially one idea: the equality of the sexes. It immediately became popular—celebrities began openly calling themselves feminists after years of avoiding the question, and major companies began selling feminist-branded clothing and merchandise.

While the rebranding was effective in popularising the concept of feminism, what it ultimately promoted was a generalized version of feminism which, notably, left out the integral concept of intersectionality.

Because intersectionality didn’t get included in the re-branding, the term “feminist” could be used by anyone. Female CEOs who refuse to pay their workers a livable wage and provide them with zero benefits call themselves feminists because they are women in positions of power. White women who only address the misogyny that they experience, but not the much more frequent, more oppressive, more violent iterations of misogyny that women of colour endure, call themselves feminists. And Prime Minister Trudeau calls himself a feminist while simultaneously engaging in environmental racism and neglecting the needs of millions of impoverished Canadians.

Trudeau began branding himself as a feminist before taking office, but perhaps never more prominently than at the UN Conference for Women’s Equality in March 2016. There, he claimed the title of feminist and declared his support for feminist issues like providing parental leave and childcare, hiring more women into leadership positions, closing the pay-gap, and addressing violence against women.

Trudeau received international attention for his stance at the conference—almost as widespread as the news that he had formed a gender equal Cabinet when he took office in 2015. The type of adoration he gains by proclaiming himself a feminist is similar to the adoration he receives for his looks, in that he relies on media branding for his public support rather than his actions as Prime Minister.

Oxfam Canada, an affiliate of the Oxfam Confederation, uses an online scoreboard to track Trudeau’s promises regarding feminism and compares them to the actions his government has actually taken  As of 2019, the Oxfam Canada Feminist Scorecard ranks Trudeau as succeeding in the “global leadership on women’s rights” and “investing in women’s leadership” sections, but note that he’s struggling in the areas that require a more intersectional approach, such as “care work” and “climate change and extractive industries.”

A recent example of Trudeau’s failure in these categories would be his decision to purchase the Trans-Mountain Pipeline for $4.5 billion of taxpayer money—a pipeline which, months later, was deemed illegal by the Federal Court of Appeal. This was because the people responsible for planning the pipeline failed to address its environmental impacts and to properly consult the Tsleil-Waututh Nation and other First Nation bands that would potentially be affected.

If Trudeau was truly a feminist when he claimed to be one, he would have invested that money into care work. Or he would have funded the purchase of Greyhound Canada in order to bring back the closed routes that helped mobilize people without access to cars or air travel. This could reduce the number of women hitchhiking, which in turn could help address the epidemic of missing and murdered Indigenous women and girls that Trudeau claims to be committed to ending.

If Trudeau was less concerned with the feminist brand, and more concerned with actually helping women, he would make intersectional decisions that dismantle the power structures of white supremacy and capitalism, because those systems are directly responsible for the oppression of women.