Though KPU Facilities Services says some remaining trees pose a safety hazard, its risk assessment reports have not yet been made publicly accessible 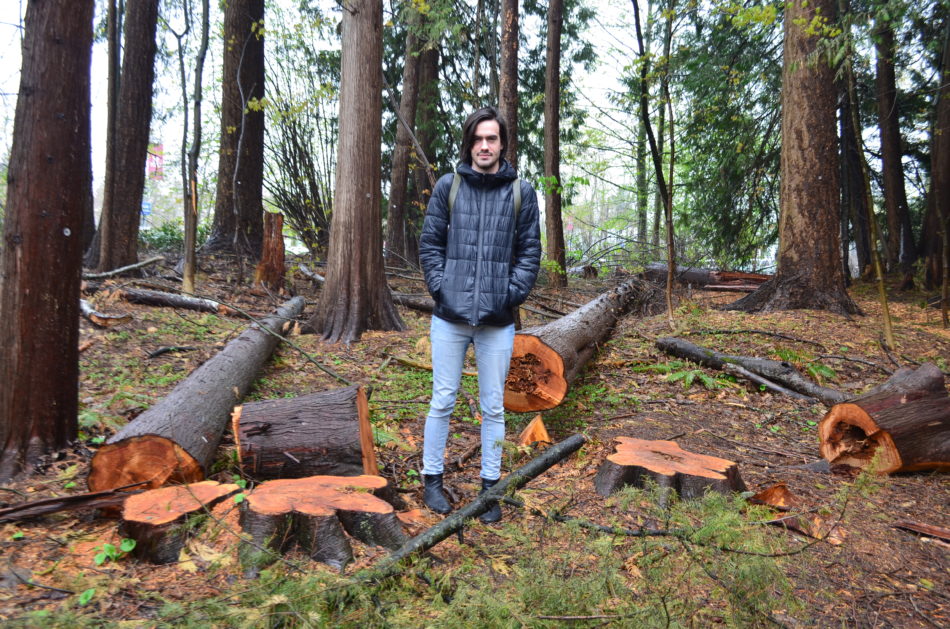 Despite the fact that nearly 70 trees in KPU’s Surrey campus forest were taken down last year, Director of Facilities Service Andrew Chisholm says that permits for more tree removals will likely need to be obtained.

For every tree removed on KPU property, a risk assessment report needs to be completed. This document details each tree’s individual health, the risk of it falling down, and the amount of damage it can cause if it does fall. Facilities Services has chosen not to make these documents available to students and faculty.

The Value of the Forest

KPU Horticulture instructor Betty Cunnin, who is a member of a newly-formed committee dedicated to limiting further damage to the Surrey campus forest, has made several requests to see the risk assessments, but was deferred first to the university’s Provost and later to Jon Harding, VP Finance. She says that Harding then told Cunnin’s dean to instruct her to “stop asking to see the report.”

More recently, Cunnin has been told to “sit tight,” and that the reports may be released to the entire KPU community in the near future.

“With only verbal confirmation to go off of, it’s hard to stay patient,” she says. “I think they just hope I’ll drop the whole issue.”

As a qualified though non-practicing tree risk assessor, Cunnin expresses doubt about the accuracy of the risk assessment reports.

Though she agrees that some of the trees should be cut down, Cunnin argues that by removing as many as they already have, the university missed “an opportunity to maintain [the trees] as a wildlife resource.”

According to her, by cutting down major sections of the forest, the university is simply doing “damage control” on a “valuable remnant of nature” which she believes KPU has neglected to properly maintain. She calls the Surrey campus forest a “precious jewel,” particularly because of its “value to the Kwantlen First Nation” and to the university community as a whole.

Former President of the Kwantlen Student Association Joseph Thorpe also believes that KPU should be more diligent about preserving its natural resources.

“There’s nothing around KPU that’s nature-related anymore,” he says. “Soon enough, it’s going to be another urban space with only flat surfaces and concrete.”

Thorpe, who is Métis and Cree and sits on KPU’s Indigenous Student Council, is a proponent of the psychological benefits that the forest provides for students, as well as the cultural potential of the forest to be used “for ceremonial purposes on actual Kwantlen lands.”

However, since the removal of the trees began, Thorpe says that the forest is no longer an “accessible space.”

“If they decide to keep it, they need to be more cognizant of actually taking good care of it,” he adds.

According to Chisholm, the trees need to be felled for “safety reasons.” He says that, due to the declining health of the forest, several unhealthy or dying trees are “probably within striking range of the building.”

In consideration of “all of the pedestrians walking near the forest through the parking lot,” Chisholm worries that “someone could get killed.” He adds that the forest is also a fire liability, and that a year of drought has left the trees dry and combustible.

Cunnin, however, states that Facilities Services has “opened up the canopy” by cutting down so many trees. This lets in sunlight that the Surrey campus forest naturally limits, and “only serves to dry out the soil quicker,” which can lead to more rapid drought and can turn the forest into a more significant fire hazard.

Chisholm maintains that the forest’s rapid decline in health, which has occurred within the last 12 months or so, prevented his department from saving the trees.

Though The Runner’s access to the risk assessment reports has been limited to a “quick overview” under Chisholm’s supervision, the documents reveal some important details.

According to Chisholm, facilities services needed permits to cut down 30 larger trees last year, while 40 smaller additional trees didn’t require permits to be removed. He explains that these smaller trees were cut down to gain access to the larger trees.

Despite being told that gaining approval to release these reports outside of his office “won’t take very long,” more than a month after this review the documents remain unreleased.

Cunnin says she has been trying for months to work with facilities to clarify how risks were assessed through these reports, but has been unable to find any new information.

The Future of the Trees Still Standing

It is unclear to the KPU community whether Facilities has cut down any additional trees since late 2018, and this confusion extends to the very fate of the forest.

Lekeyten, KPU’s Elder in Residence and a member of the Kwantlen First Nation, says he was told by several workers who were tagging and assessing trees that no more would need to be felled.

“They told me they’re done with everything. They told me, ‘What’s left standing will remain standing,’” he says.

Chisholm says that he’s not sure who gave Lekeyten that information, but adds that he is happy to have a conversation about the future of the Surrey campus forest with him.

Due in part to the uncertainty, members of the KPU community are beginning to mobilize in an effort to save the remaining trees in the Surrey campus forest. Lekeyten and professors from various faculties—including horticulture, psychology, criminology, and creative writing—have formed a committee to defend the forest.

In an email sent to concerned members of the community, KPU Creative Writing instructor Ross Laird wrote, “It looks to me like the long-term plan, from the university’s point of view, might be to remove the forest altogether.”

Laird believes greater involvement from the community is needed to save the forest, as well as advocacy and public discussion. Progress will be made, Laird says, “if there is no way for the university to continue to silently take action in the forest without broader consultation.”

“In order for this to happen, you are going to basically have to make it very troublesome for them not to consult with a broad group of interested people,” he says.

According to Chisholm, facilities is currently testing the soil in the forest to determine what is causing the trees to die. For now, he says, official plans from the university regarding the forest will have to wait.

“We still have to figure out what’s going on with the forest before we can do a proactive move on it,” he says.