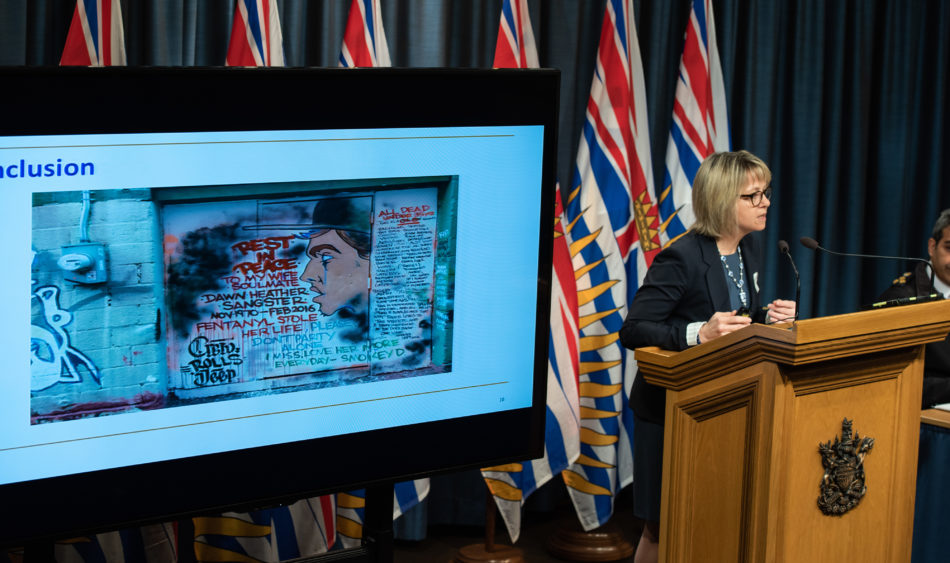 Provincial Health Officer Dr. Bonnie Henry released her report Stopping the Harm: Decriminalization of People Who Use Drugs in BC, as part of an effort to mitigate the provincial overdose crisis.(flickr/ Province of British Columbia)

A report published by the Provincial Health Office entitled Stopping the Harm: Decriminalization of People who Use Drugs in B.C. calls for the possession of illicit drugs to be decriminalized in British Columbia.

The report, which was released on April 24, offers a comprehensive argument for how decriminalization is likely to benefit public health in the province.

“Despite sustained efforts in B.C. to resolve the overdose crisis, and the declaration of a public health emergency, there has been minimal success in stopping the rising death toll since the crisis started,” reads the report. “Alternative solutions are warranted immediately.”

The report repeatedly expresses how “the ‘war on drugs’ has been recognized as a failure at a global level,” and that “British Columbia cannot ‘treat’ its way out of this overdose crisis, or ‘arrest’ its way out either.”

“This is a public health crisis, and we should not be treating it like a law enforcement issue anymore,” says Stephanie Lake, a UBC graduate student studying public health. She is the outgoing president of Canadian Students for Sensible Drug Policy, a grassroots youth organization working to promote sensible drug policies and drug education.

“Some major misconceptions that we often hear conflate decriminalization with legalization,” says Lake. “[Decriminalization] mainly involves removing the criminal element that comes with possessing a drug, and moves it into the jurisdiction of public health.”

Lake calls the release of Stopping the Harm extremely encouraging, and says that the report shows that the top health officials in the province understand that issues surrounding drugs can only be addressed “through removing the criminal element associated with possession.”

Decriminalization, the report says, would effectively “restructure” the police approach to small possession by connecting possessers to health and social services instead of arresting them or ignoring them completely.

“A lot of cops are basically being told to look the other way when it comes to drug possession,” says Koushal Charan, a KPU Criminology student studying law enforcement surrounding drug abuse.

Charan explains how he has learned that, in recent years, many officers have been unofficially instructed to ignore drug users unless they become violent.

“There are so many people using, they just don’t have the resources to keep up,” Charan explains.

Stopping the Harm details a case study done in Portugal—a country that adopted a decriminalized approach to drug possession for personal use in 2001—which could serve as a potential model for application in B.C.

Evidence has shown that the Portugese drug policy model, along with other interventions such as harm reduction, prevention, enforcement, and treatment strategies, has led to “an increase in treatment uptake, a reduction in drug-related deaths, and importantly, no increase in drug use rates,” the report says.

Small possession for personal use was changed from a criminal offence with a potential jail sentence to an administrative one. This can range from warnings, fines, or bans on associating with specific people or visiting certain places to removing the right to carry a firearm and suspending the right to practice licensed professions that have the potential to endanger other people. Criminal penalties are still applicable to illegal drug manufacturers, dealers, and traffickers.

“We in Canada know that our drug laws are unjustly enforced,” Lake says, citing the fact that drug laws disproportionately affect minorities and marginalized groups who are “already contending with a whole host of social and structural vulnerabilities.”

Decriminalization would, according to Lake, help to “destigmatize substance use,” which is a “major barrier” that drug users experience when it comes to trying to access employment, housing, and the health care system.

“Unfortunately, what we are seeing now is a failure for our government to act,” says Lake. “They’re being political when it comes to [decriminalization], but unfortunately we’re losing people to this crisis. Lives are on the line.”