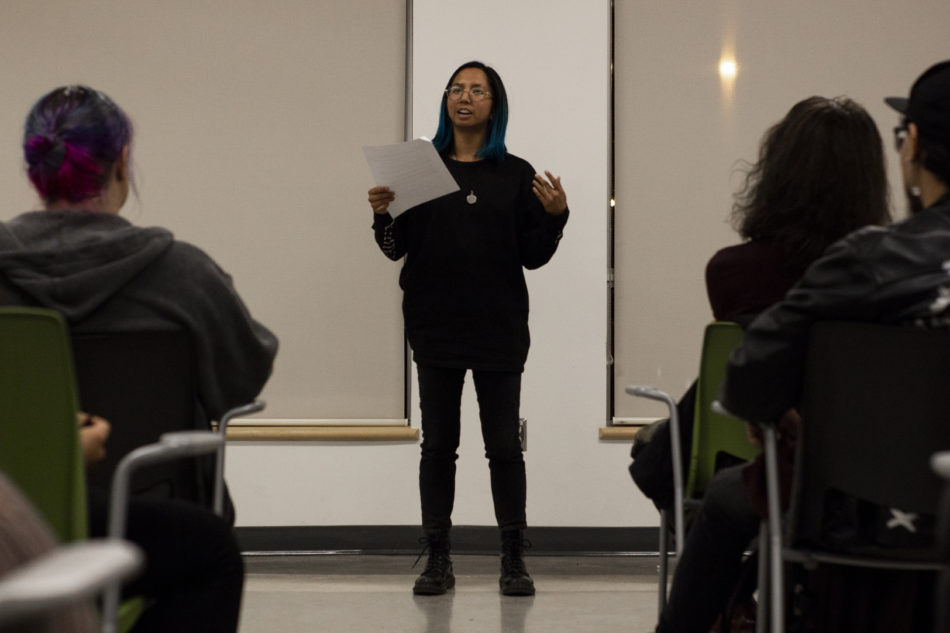 Verses Festival of Words is an annual poetry festival that just completed its ninth year celebrating Canada’s slam poetry scene. The 10-day event ran from April 25 to May 4 and was held in multiple locations in Vancouver, mainly along Commercial Drive.

The festival kicked off with Hullabaloo, the youth poetry slam. Teams from all over the Lower Mainland and Vancouver Island showed up to compete and, in the end, A Bundle of Carbon Atoms took home the trophy.

Verses Festival offered many workshops on topics ranging from decolonizing the arts to how to work with loop pedals. It also featured different performance events, including everything from nerdy poetry to the launch of Write Bloody North, a new Canadian press.

The main event was the Canadian Individual Poetry Slam, where poets from all over Canada came to either represent their regular slam (after qualifying and winning the position) or to “storm” the lineup and fill the remaining slots.

KPU’s very own slam team, Slamapalooza, was represented by Mariah Negrillo-Soor, also known as Marz. Marz considers herself a “baby poet”, compared to some of her opponents who have been in the slam poetry world for longer. Her introduction to the scene was in October, when she filled Slamapalooza’s last-minute vacancy for its Canadian Festival of Spoken Word team.

Since then, she has grown tremendously as both poet and performer and says that she is just happy she got to “perform work [she’s] super proud of” at Verses.

From the outside, the poetry world can sometimes seem like a tight-knit group that is hard to infiltrate. Still, as Verses volunteer coordinator Anjalica Soloman notes, the “people who are [on stage] are sharing their most vulnerable heart.”

“It’s a group of people creating a safe environment to listen and to share stories,” she says. “Once you’re a part of it you see how intimate the community really is because we all share such close details of our lives with each other. We show up for each other, not just in performances but in the real world, we show up for each other emotionally.”

Johnny MacRae, the artistic director of both the Verses Festival and the Vancouver Poetry House, points out that the poetry community is “just generally an anxious [one], so people might seem like they’re in and they’re not going to let you in, but the reality is that even very established people are just as nervous and shy as you are, even if they don’t seem like it.”

The best way to break the ice, he says, is to get on stage and share your work. Once people are able to approach you about how they enjoyed your words, other conversations come more naturally.

MacRae adds that the purpose of the festival is “to expand the boundaries of how we perceive poetry.”

“Verses offers an opportunity for there to be this vast crossover of mediums that blows up those definitions,” he says.