Kwantlen’s recent media attention could be making us look bad 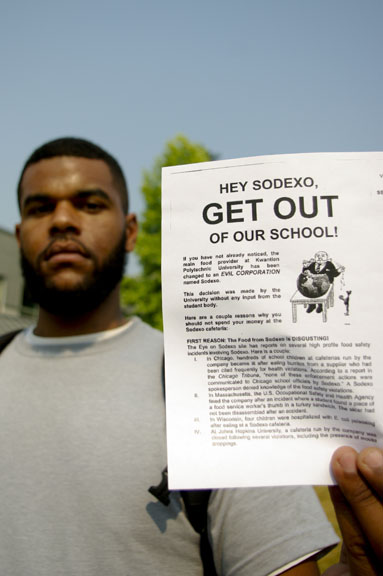 Criminology student Emery Warner sparked media attention after being kicked off Surrey campus for refusing to identify himself. Warner was handing out flyers protesting Kwantlen’s new cafeteria, Sodexo. // The Runner

Kwantlen Polytechnic University has been all over the news in recent months.

The KSA’s Beat the Bus race, wherein both cycling and running proved to be faster than taking transit between the Surrey and Langley campuses, prompted a spate of media coverage about TransLink’s shoddy bus service south of the Fraser.

Whether these were good-natured publicity stunts or not, these stories sparked important discussions, both at Kwantlen and in the larger community: about public transportation, free speech and academic freedom.

Not every story has ended with such positive outcomes. Kwantlen also made headlines this summer after a Freedom of Information search revealed that Kwantlen had received $50,000 to research the same development of agricultural land that it had spoken in favour of before a Delta land committee in December of 2009.

Not only did Kwantlen fail to disclose that the Century Group question had paid for the research, but the school also was set to receive a reported $100,000 endowment fund and use of a research centre if the development went ahead. Kwantlen’s executive director for research, Jason Dyer told The Province in July that the researchers weren’t lobbying and that research costs have to be paid by somebody.

Dr. David Atkinson has commissioned a review of the situation and has promised to report the results to the Kwantlen Board of Governors and to the public, but the whole thing smacks of damage control, too little and too late.

Kwantlen has only been a fully-fledged university for a very short period of time and its reputation and credibility as an academic institution is still being formed.

Undisclosed conflicts of interest and ethics violations are not things we want associated with the Kwantlen name.

When the final report is in, we need to know how this could have been allowed to happen and how we as students and members of the community can be assured that itwill never happen again.  Students should have confidence that when they graduate, their Kwantlen degree will be something of which they can be proud.

While popular wisdom may claim that there is no such thing as bad publicity, this is definitely publicity which Kwantlen cannot afford.