RCMP says suspicious object was only a pipe.

Hundreds of Surrey Kwantlen students were evacuated from classes Monday morning, after a suspicious object was discovered on campus by a Kwantlen staff person.

Kwantlen’s security ordered the evacuation of part of Surrey’s campus around 8:20 a.m. on Sept. 17. 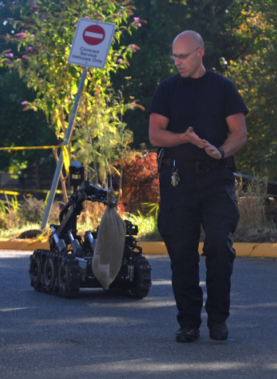 The object turned out to be not an explosive, according to Surrey RCMP media representative Sgt. Drew Grainger.

“It was not a pipe bomb. It was a piece of pipe; no bomb,” he said. “We’re trying to determine if possible how it got to where it was and if there’s any threats associated with it, which we have not determined yet.”

The mysterious object was found in the parking lot behind Kwantlen’s receiving dock just west of Birch building. Both Birch and the southern part of Cedar building were evacuated and taped off.

As a safety precaution, police deployed their explosives disposal unit to Kwantlen. “[They] brought out their robot, which has the capability and technology to assess and also remotely detonate anything that is suspicious,” said Grainger.

Three explosions were heard on campus, as the RCMP made sure the fragments of the object weren’t dangerous.

Surrey RCMP treated the unidentified object as a potential pipe bomb, when responding to the incident, according to Joanne Saunders, Kwantlen’s director of marketing and communications.

“There were no threats,” said Saunders in a telephone interview with The Runner. “It was not  like someone had called in and said it was a bomb. It was just a suspicious piece that was found.”

By 2 p.m., police had left the scene and Kwantlen students were let back into campus.

**UPDATE 3:46 pm, Monday, Sept. 17**
Students in Cedar building were evacuated for a second time today, after a fire alarm was pulled. More details as they come.