Behind the Mask: The Selfishness of Black Bloc 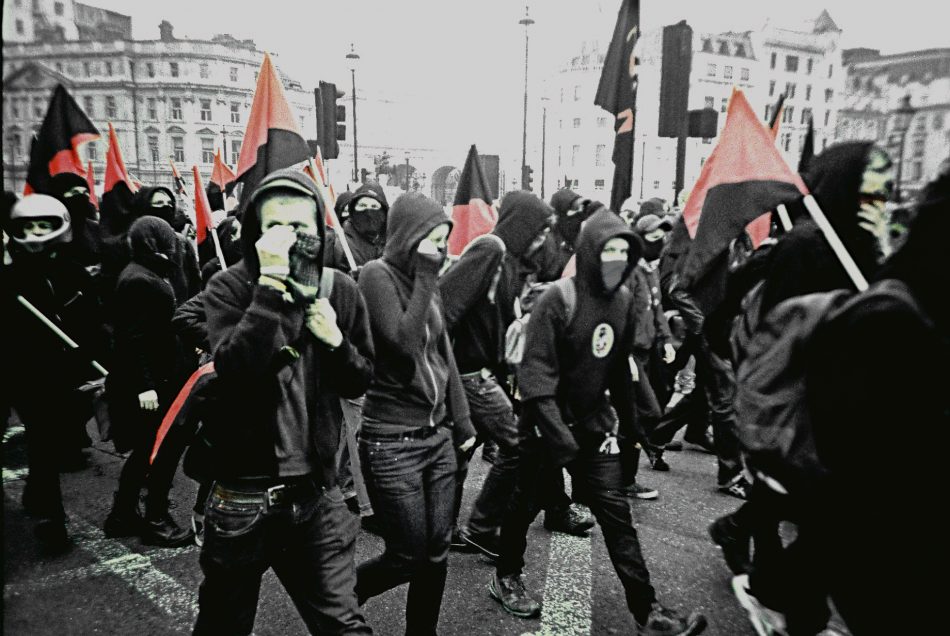 Members of the Black Bloc join in protests in the U.K. in 2015. (flickr/Nic Walker)

Without sustained public protests, standard human rights in North America would probably be centuries behind where they are today.

Historically, important and impactful protests like the Stonewall Riots, the Birmingham campaign, and the Vietnam War protests would turn violent because of the rising tension and conflict in the events, and the one-sidedness of armed authoritarian suppression. But now, the evolution of citizen journalism and social media has made it much easier for people to report on and help identify those who are responsible for inciting violence. For that reason, some protesters go out of their way to protect their identity.

There are legitimate reasons for wanting to conceal your identity during a demonstration—in an oppressive police state or dictatorship, your identity becomes a liability. I have personally talked to activists who told me they were afraid to be seen with anti-racist and anti-fascist movements because there were people in their lives who could potentially become a threat to their safety if they found out.

However, there are also people who use anonymity as a way to commit crimes and hurt people without facing the consequences, crossing the line between civil expression and civil misconduct.

The Black Bloc has been a loosely organized label for these people since the 80s, but as political tensions have been steadily building in America and Canada over the past decade, it has become prominent again. In August, members of the Black Bloc attacked a Global News journalist during a protest in Quebec, destroying some of their equipment.

This is probably the most telling example of the misguided motivations of such a group: actual protesters should welcome journalists to their events because news coverage can strengthen the reach of their message. Attacking a journalist is unreasonable, as they are ideally objective, unbiased bystanders who are only there to observe and report. That’s it.

Members of the Black Bloc released a statement online that defended the actions of the attackers, claiming that they had the right to become violent in order to protect their identities from the news media. The post advocated the Bloc’s use of “going in anonymous mode” by donning masks to protect themselves and their identity—a cowardly, thinly veiled parasitism that divests them from the responsibility of their actions and puts others at risk.

The nature of meaningful protest is inherently subversive. It’s a populist cry for change, an impassioned expression of dissent, and a rallying cry for action. People protest because they disagree with policies or ideologies, so it’s understandable that when a crowd of unsatisfied and upset people congregate into one space, things might get out of hand.

The Black Bloc is a representation of the ugliest intentions some people can harbour in these spaces. Some people have an appetite for violence, chaos, and destruction, and they see protests or large public gatherings as an arena, a means to satisfying this appetite with a diminished risk of being held accountable for their actions. Think of the people who looted and vandalised downtown Vancouver after the Stanley Cup finals.

Unprovoked violent action—which should be distinguished from violence made in self-defence—is the Achilles Heel of earnest demonstration and protest. Once a group like Antifa or Black Lives Matter becomes associated with violence, their message becomes secondary, their motives more open to question and their reputation irreversibly corrupted and tarnished. These incidents give governments excuses to clamp down on democratic rights and target activists and political dissenters.

Activists need to organize peaceful protests and marches because they feel that every alternative method of voicing their opinion is inadequate. When members of the Black Bloc hijack these events, they delegitimize the points actual protesters are trying to make, and they open up movements or groups to criticism that would otherwise be irrelevant. They put other demonstrators in danger by inciting combative reactions from police or counter-protesters.

This behaviour is irresponsible and selfish, and it is not different from regular violent criminality.