Boutique record label and purveyors of synth-pop, Arbutus Records from Montreal kicked off the New Year with a couple of events in Vancouver. After selling out a New Year’s Eve show at eatART Gallery, featuring label artists Grimes, Sean Nicholas Savage (on tour to promote his new 12” record Mutual Feelings of Love and Admiration), Blue Hawaii and Paula with local favourites Makeout Videotape and Resorts, the people behind Arbutus put on a showcase on Jan. 2 at the Zoo Zhop. It was an early show, with doors opening at 7 p.m. and the show concluding right at 11 p.m.Cadence Weapon (Rollie Pemberton) DJed between sets.

Ex-Vancouverite Sebastian Cowan started Arbutus Records as an offshoot of a previous project of his, the now-defunct venue Lab SynthËse. Cowan says that Arbutus, like Lab SynthËse before it, is an exercise in “community”. To wit, everyone currently on Arbutus Records lives within blocks of each other in Montreal’s Mile End, all considering each other “close friends”. 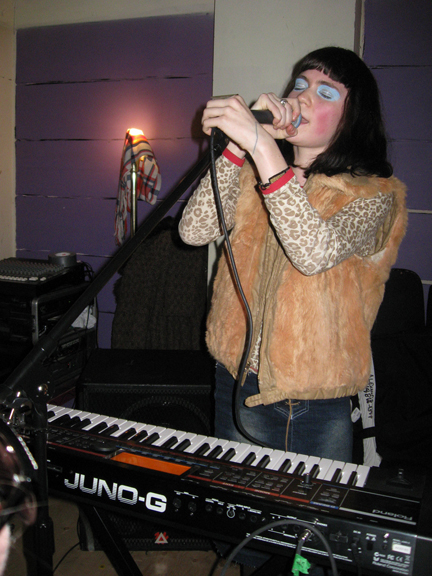 Claire Boucher, known as Grimes, gets intimate at the Zoo Zhop on Jan. 2. chris yee/The Runner

The venue for the Jan. 2 show, the Zoo Zhop, is a similarly tight-knit affair. In addition to serving as a venue and practice space, as well as a record store with a selection of records both old and new, classic and underground, it’s also home to proprietor David Mattatall and a bunch of his friends, as well as his (exceptionally agreeable) cat.

After a sound check that could have been a set in its own right (Cowen was responsible for this – he was a studio manager in England and had turned down a contract to work for Sony, instead returning to Canada to “do something on his own”, or so a profile of him in the Montreal Mirror says), Paula opened for the night. A side project of David Carriere, songwriter and mastermind of Arbutus band Silly Kissers, Paula served up stripped-down versions of the Kissers’ material. Carriere sings and plays guitar whilst backed by Silly Kissers keyboardist Jeremy Freeze and Arbutus labelmate Sean Nicholas Savage on electronic drums (“$2 from Value Village,” Carriere says). While Carriereís vocals often came across as yelpy without the support of his vocalist bandmates (currently Jane Penny and Bob Lamont; unfortunately, they weren’t able to make it to this show), his guitar work brought out the craft of his songwriting. Ultimately, Paula seemed to be just a fun, good-natured detour from Carriere’s usual output. As openings go, it was pretty good.

Next up were local fixtures Terror Bird, with Nikki Never on vocals and keyboard and Jeremiah Haywood on drums. Nikki Never’s vocals, a subdued yet smoky take on Siouxsie Sioux or Xmal Deutschland’s Anja Huwe, certainly lived up to the “glam goth haunters” description, even though it fell slightly short of Terror Birdís recorded material at times.

As vocals go, however, Sean Nicholas Savage (who drummed during David Carriereís Paula set earlier in the show) was easily the highlight of the night. Coming in after Terror Bird’s set, Savage’s liquid falsetto, breathy stage presence and disco dancing complemented his buoyant pop belying a sense of melancholy and longing (his song “Disco Dancing” sums this up). The Zhop was packed by the time of Savage’s set, but people were still trying to dance at the front. One audience member was singing along to all his songs and raved about him to all her friends in attendance. His set ended to great cheers from the audience. Sure, he was performing to some instrumental tracks on his iPod that he had made before, but it was great nonetheless.

Donning eye makeup, Blue Hawaii came in next, emitting ethereal sounds (much of it off their recent debut, Blooming Summer) into the Zhop’s airspace, Raphaelle Standell-Preston treating her vocals with a series of effects pedals and Alex Cowan working everything else (synths, laptop, guitar). Despite some glitches with Raph’s pedals, deftly plugging them back in, carrying on with her vocals as if nothing happened. The audience called for an encore and, amazingly, got one. Blue Hawaii finished their set with some free improvisation on their instruments and equipment. I will avoid the temptation to make a reference to their doing Elvis covers.

Finally, Grimes (Claire Boucher–synths and effects) closed off the sets with her “half-improvised” synth work, reminiscent of her latest release, Halfaxa. I am left with the distinct impression that Grimes and Blue Hawaii are working on similar material. Coming across at first as being a more strident, or perhaps unhinged, Blue Hawaii, Grimes seemed to take a more intimate, poppier turn in a fitting coda to the showcase, reflective of Arbutus Records’s pop sensibilities.