Vancouver Pride Society president says measures would be “too little too late.”

Men who have sex with other men, (or MSM), are currently not allowed to donate blood for transfusion to Canadian Blood Services (CBS). This policy may soon change, but some critics wonder how much change is enough.

In September of this year, the board of directors of CBS, the national non-profit blood bank, passed a motion “committing the organization to re-examine” their policy regarding the donor status of MSM, according to a CBS website statement posted last month.

The objective will be to reduce the lifetime exclusion on MSM donors to “no less than five years and no longer than 10 years,” says the web statement. 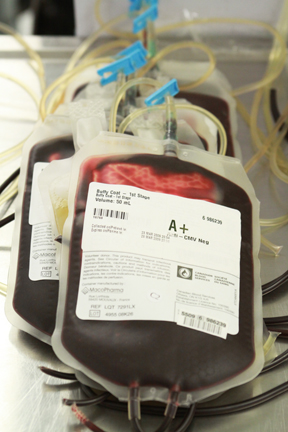 In other words, if the objective is met, MSM who abstain from homosexual intercourse for five to 10 years—depending on the outcome of the policy review—will be allowed to donate blood for the first time in Canada.

But despite this step towards change, some say it isn’t enough.

Coolen considers the existing policy on MSM discriminatory and “a reaction” to HIV and other blood-related illnesses that stereotypically affect gay men.

“This isn’t specifically a gay-related issue. Many other people are high risk, depending on their lifestyles or [habits],” he says. “Heterosexual people can get AIDS too, but they’re not being put under a microscope the way MSM are.”

However, a spokesperson for CBS denies that the policy is discriminatory. “This is not a policy targeting ‘gay’ men, but rather ‘men who have sex with men’.”

“Data suggests that an estimated 7 per cent of men in the U.S. have had sex with another man at least once, but only 44 per cent of these [men] identify as gay or bisexual.”

Furthermore, CBS cites evidence standards set out by the Canadian Safety Association and the Public Health Agency of Canada, which single out MSM as “high risk.”

CBS stresses that they consider the social implications of its policy on MSM—the possibility that it might contribute to the cultural stigma still attached to homosexual sex. It’s why the organization “engages with members of affected communities” through an LGBTTQ (lesbian, gay, bisexual, transgender, two-spirited, queer, questioning) working group.

Yet Coolen calls the stance on MSM “sad.”

“In this day and age, [considering] the progress the LGBT community has made, giving into fear is unnecessary,” he says.

Overall, Coolen is puzzled by the harshness of the restriction on MSM. He asks, “Why can’t they just screen the blood?”

According to CBS, they use the best available technology to test every unit of blood—but these tests are “not infallible.”

“No test is 100 per cent perfect,” says CBS. “In fact, there is a window period of one to two weeks in which a person infected with HIV will not [yet] test positive.”

The organization says they have always been open to change. “But [our] first priority is to protect patients from potential harm. Ultimately it is the patient who bears 100 per cent of the risk of the blood system.”

In the end, the proposed changes on MSM policy may not even come to pass.

“The board of directors only approved the first step of a long process,” says Angela Poon, media contact for the B.C. branch of CBS. Consultations with Canada Health, as well as other medical officials, now have to happen.

Poon says CBS would like to see some MSM donating in the future. “But how far are we to accepting blood from MSM? Not even close.”