Destroying science is not the Canada we want.

Government censorship of scientific research and information is a practice most commonly associated with the authoritarian regimes of North Korea or China. Yet the Conservative government, under the rule of Stephen Harper, has transformed Canada into an Orwellian State.

In what is viewed as another attack on the scientific community, the Harper government has shut down one of the world’s principal aquatic and fisheries research libraries.

Out of the 11 libraries across Canada, the Department of Fisheries and Oceans (DFO) are shutting the doors to seven of them. The reasoning behind the closures is to cut costs while creating a more accessible online library for Canadians, says the government of Canada DFO website.

When word of the closures was made public, the DFO assured the public that there would be no loss of knowledge. Materials would be relocated to the libraries in Sidney, B.C. or Dartmouth, Nova Scotia, or digitized and made readily available.

Unfortunately it seems that the government’s assurances have fallen short their handling of the closures is being compared to the sacking of the library of Alexandria. 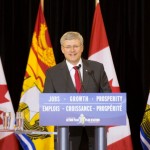 There are other events that have made the circumstances of the closures questionable. Mike De Souza, from Postmedia, uncovered a memo labelled ‘secret’ that revealed closing libraries will only save taxpayers a mere $443,000 annually.

At the end of December 2013, the Freshwater Institute library at the University of Manitoba was shut down. After allowing scientists and members of the public to claim resources in a haphazard attempt to clear out stock, there were reports of materials discarded in a dumpster.

The DFO website says that it is only duplicating items that are being removed from the collection, although they add that they will remove “in rare instances, materials which fall outside of the subject disciplines pertinent to the department’s mandate.”

This is a mandate, which in the new Fisheries Act in 2012, saw a series environmental protections stripped away.

Many scientists are calling this shutdown heartbreaking. Others are condemning the act and raising warning to the public.

Former fisheries minister Tom Siddon said in an interview with CBC that, “Some might suspect that [the shutdown is] driven by a notion to exterminate all unpopular scientific findings that interfere with the government’s economic objectives.”

Preceding the library closures, this last term saw budget cuts to Environment Canada, research programs dealing with climate change, ocean habitats, pollution and toxic waste clean up. Instead, Harper is plugging money into tar sands and pipeline projects despite warnings from environmental scientists across the country.

In fact, the more environmental barriers he stripped down, the more Harper imposed dictatorial policies meant to muzzle scientists working for the government. Beginning in 2008, researchers working for Environment Canada and the National Research Council of Canada were told to refer all research queries and findings to the communications department. Strict media policies were enforced with scientists no longer able to give interviews or publish work without being preapproved by officials.

A June 2013 survey of federal government scientists done by the Professional Institute of the Public Service of Canada found that 24 per cent of respondents had been told to alter information when speaking publically.  Thirty-seven per cent had been previously prevented from responding to media queries.

These policies mean the Conservative government is ensuring that Canadians remain unaware to pertinent scientific research, allowing Harper to split his energy. On one side is the northern resource-fuelled economy of tar sands, pipelines and mining. On the other is the restriction of flow of scientific knowledge pertaining to environmental issues surrounding his development tactics.

In March of last year, Green Party leader Elizabeth May sent out a tweet referring to Harper’s government as the “North Korea of environmental law,” and criticism of Stephen Harper’s “economy at all costs” government is both wide-spread and multi-national.

The New York Times‘ “Silencing Scientists” article from Sept. 21, 2013 summed it up nicely when they wrote: “The Harper policy seems designed to make sure that the tar sands project proceeds quietly, with no surprises, no bad news, no alarms from government scientists. To all the other kinds of pollution the tar sands will yield, we must now add another: the degradation of vital streams of research and information.”

But when this ‘one voice’ is turning a blind eye to cultivated knowledge, scientific evidence and seems intent on destroying such an integral aspect of Canadian identity, then when it comes down to it all it is not accurately representing our voice.