Where in the World is Kwinten the Eagle?

The new roles of a varsity mascot 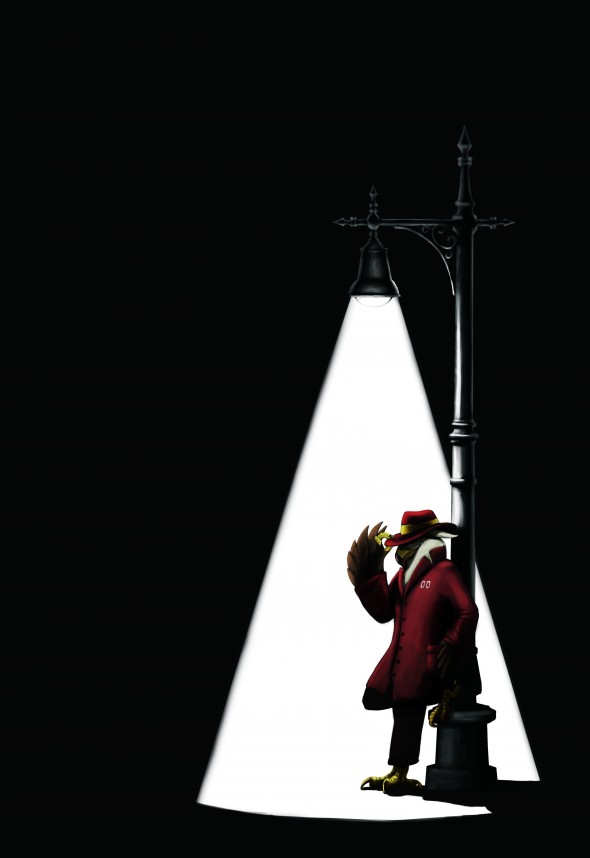 “Show me,” I say placidly, cooly concluding the coercion of my informant from the athletics department.

He rises from the chair in his small Cedar building office and unlocks the door to a back room, where on the second-bottom shelf of a steel, five-by-five garage organization unit sits a large, 60-inch electric blue duffle bag. It’s zipped to its ends.

It’s been more than a year since the day that Kwantlen Polytechnic University administration changed its priorities concerning the athletics department. It was a day that spelled the end of the championship-winning KPU sports teams that competed in PACWEST starting at the turn of the century. People felt dismayed. Many athletes flew the coop to varsity teams that still could pay their dues.

Despite the administration’s efforts to quell the uproar with platitudes of exploring other options, we soon knew what would become of the university’s varsity sports teams.

But no one asked about KPU’s esteemed eagle mascot, Kwinten.

Really, what cause belongs to a mascot without a varsity team? The roster now consists of number double-zero—Kwinten—and it ends there. He can’t even play doubles badminton.

The things I heard about Kwinten in the months following the department cuts were speculative at best. I’m told his last sighting was in February 2016, at a varsity basketball game. Old, yellowing campaign posters in the newsroom suggest that he ran in the last Kwantlen Student Association general election. But he never showed up at the debates or the candidate briefings. His tweets stopped coming into my Twitter feed for some time. All strange things, really, for any avian being.

These are my thoughts as I unzip the duffle bag before me and reveal a head of feathers—white, like the most liberated stripes on the star-spangled banner.

I peer down and place my hand on his snowy crown. What is liberty to an eagle, if not its wings masterfully cradling the air’s rigidity in the lucid dawn? What is freedom to an eagle, if not the Chinook’s final buckling within its talons, which ferry its rose-bellied prey to piscean Valhalla? What should autonomy be, if not the eagle’s God-given right to deem only the treetops and open skies as befitting their kingly tail-feathers?

I’m guessing freedom’s not the bottom of this Umbro bag. My informant, however, assures me that the eagle is still getting work. It’s just not strictly varsity stuff anymore.

“Kwinten is the spirit of the students,” says the informant. “So he comes out randomly, he’s not on a set schedule, he’s not in the union. But he will be coming out more often to student events and KPU events.”

“He does all these things,” says the informant, “And he needs now to branch out. You know, get to Richmond, get to Langley, get to Cloverdale, start meeting more students and getting excited about that.”

“Is his nest usually around here?” I ask.

“He has multiple nests.”

Right now, the informant says that Kwinten’s current needs include his wishes for new clothes for his different roles. If he’s at a school of business function, for example, he’ll need a suit.

And while no one in the Lower Mainland tailors graduation gowns with a giant, seven-foot anthropomorphic bird in mind, Kwinten happily emoted at convocating students in early June. He donned a robe that left him with naked ankles.

He flapped happily as golfers tried to sink eagles at the recent KPU Foundation golf fundraiser. He recently dribbled circles around young’uns at a summer soccer camp in Delta, and he’s slated to compete in a paddleboarding competition in the Pacific Ocean for Children’s Hospital foundation.

Philanthropy is perhaps an arbitrary flight for the usual cage-bound volery. Not Kwinten. I’m told he does a lot of unexpected things.

“There was a time when Kwinten went into the courtyard and started playing frisbee with students, randomly,” says the informant. “He couldn’t catch for the life of him. But he tried. He definitely tried.”

After my chat with the informant I ruminate in Grassroots alone, in an inebriated state before another four-to-seven class. A few Pabst Blue Ribbons are unwrapped on the coffee table and I’m just, ugh, brooding about hitting this story’s deadline. I wonder about my other story deadlines, the ones I hit about the solemn-faced changes in varsity sports last year, and then, the ones that other student journalists hit when they reported on KPU sports in decades past.

The informant was ambiguous about Kwinten’s whereabouts in 1999 when varsity sports started at the university, only saying that Kwinten is “sort of quiet about the early times.” I’m left wondering.

“Does the library keep any historical information on the university anywhere?” I ask at the Surrey campus library info desk, beer on my breath.

The librarian suggests such things would reside only within the university archives, a humid room of boxes and dossiers on the library’s third floor. No one goes in there, and it’s maintained by a single part-timer, who had gone on vacation.

I convince the available librarian to pull out a selection of boxes for me. With them, I spend two hours in the offices across the library’s third-floor silent study area, sneezing from all the dust I inhale.

I remember the informant said that Kwinten once donned a retro-blue KPU jersey. I pick through some old film contact sheets of the university, hoping to unearth such a frame. I find shots of the old blue roofs on Surrey campus, but no Kwinten.

I begin to lose myself, however, in the sports sections of the old Kwantlen Chronicle newspapers from the late 1990s and early 2000s.

Even in those days, the athletics department walked on coals. A 2004 headline shouts, “Eagles grounded by poor funding.” Another story discusses the department’s fortunate evasion of the “budget-cut monster.” Who knew these words would one day read like old omens.

But while 2015 finally spiked varsity sports at KPU, the year failed to down Kwinten. No, even if all Eagles gear is currently 25 per cent off at the bookstore, Kwinten ostensibly plans to work like they sell at full-price.

The informant said that Kwinten “doesn’t make excuses—he’s a bird,” and that he’s even happy to serve the university in this new, varied capacity.

Does Kwinten speak the truth about his new roles? Or is it lip service? Who can say. Judging from his increasingly busy schedule, what is for certain is this: Kwinten lives. His destiny is not to circle endlessly the sombre perimeter of an iron aviary, nor to rock silently in a cage, within a noose masked as a bird-swing.

I suppose that nothing, not even the death of varsity could ground Kwinten—for He is the Bird-King. He is the Most Righteous Fowl; He is He Who Is Begotten of Holy Poultry.

He is Kwinten, the Eagle.