The course is the first of its kind in Canada 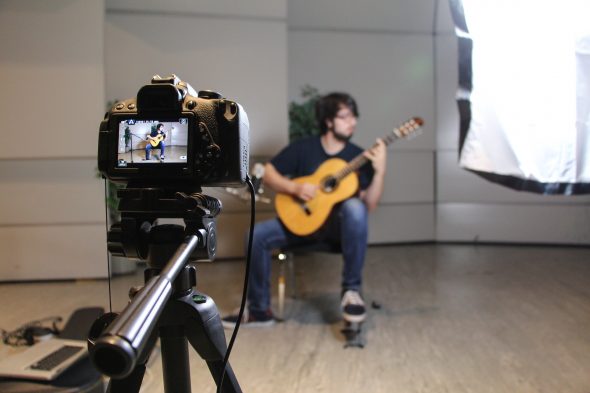 Students in KPU’s music program are given the opportunity to produce their own music videos in the MUSI 4602 course. (Submitted)

For the first time, a course at Kwantlen Polytechnic University is giving students the tools they need to express their music visually.

Music Video Production (MUSI 4602) is the only video production course in Canada aimed at music students, and is being taught through KPU’s music department this semester.

“What the music video does for the music artist is it creates opportunities to extend the meaning-making of their music,” says KPU music professor Gordon Cobb, who designed the course. “You can create a piece of music and you can record it online and people can listen to it, but if you figure out a way to pull more meaning out of your song by representing it visually, you can actually create multiple dimensions of meaning around your song.”

Throughout the semester, students in the course will make music videos featuring their own original performances and composition. Since the course looks at music video production from a musician’s perspective, a significant part of the process is actually composing the piece itself.

“What makes us different from a video production program at a film school is that we are approaching music video production from the point of view of musicians rather than filmmakers,” says Cobb. “Music is the centre of the process, not the image.”

At the start of the semester, students explore the impact that music video production can have on how their music is received by the audience. Over the next few weeks, students learn the language of video production, the basics of photography and videography, how to edit using Final Cut Pro, and the right way to record and produce audio. Pre-production is also an important focus for students as they develop their concept into a finished product.

Once complete, videos will be shared on the KPU Music Technology Facebook page. Other music videos that have been produced at KPU are already getting shared and gaining traction on the page which, according to Cobb, has received around 20,000 views.

“These are successes for young emerging music artists who are just starting their careers. They’re just in their Bachelor’s degrees and they’re already finding ways to share their work and their talent and their chops with people online who are giving them positive feedback and encouraging them,” he says. “I think that’s a huge success.”

Although this is the first semester that the Music Video Production course is being offered, Cobb has been making music videos with students for the past year and a half, and before coming to KPU, helped musicians make videos for over 10 years.

The idea for the course came about when Cobb realized that music video production was not being taught almost anywhere. He created the curriculum with the help of KPU Provost Salvador Ferreras and KPU has purchased a range of equipment for the class including three DSLR cameras, tripods, a lighting kit, and backdrops.

No other universities in Canada and few outside of the country are teaching courses similar to KPU’s Music Video Production class. Cobb says that part of the reason for this is that the course requires an instructor with a very unique skill set. He has a background in film, dance, teaching, and music. It is this experience that gave Cobb the tool set he needed to create and teach the course.

“It’s kind of like three courses—it’s music composition, it’s music production, and it’s video production,” he explains. “Just because it’s such a vast subject matter I think you have to have a pretty unique point of view to teach a course like this to music students.”

Currently, KPU plans to offer Music Video Production every other year. If it proves to be popular with students, Cobb says that the course could be offered more frequently.