The decision was met with anger by international students and representatives 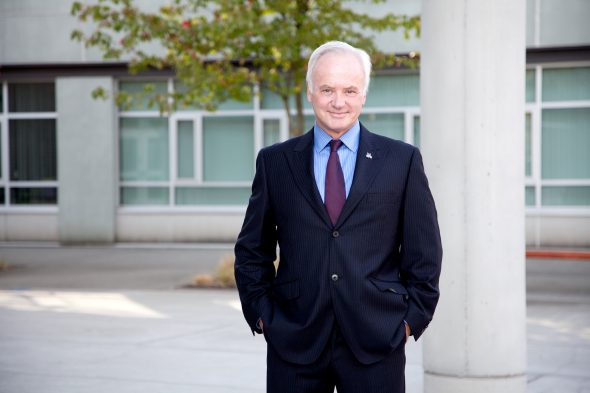 Kwantlen Polytechnic University’s Board of Governors has voted to approve a 15 per cent increase to the price of tuition for incoming international students.

University President Alan Davis says that the price increase is a necessary measure to maintain the university’s quality of service to international students. However, the decision has been met with anger by international students, and representatives in the Kwantlen Student Association have expressed concern about a perceived lack of notice and consultation with KPU students.

As written on the university’s website, Canadian Citizens or Permanent Residents pay $139.00 per credit for most undergraduate and preparatory courses, with the price varying from program-to-program. For any program admitting international students, the price per credit is $572.20—over four times more.

The vote to increase international student tuition by a further 15 per cent took place at a Board of Governors meeting on March 28. The open portion of the meeting was attended by be several concerned students and faculty members.

Kwantlen Student Association President Tanvir Singh spoke before the vote to express concern about the cost increase and to ask what kind of consultation was done with students before the decision. Members of the board acknowledged that students were not involved in this process.

“Myself and a lot of international students in the room were absolutely blindsided by fact that the Board of Governors was discussing a 15 per cent increase in international student tuition,” says Singh. “One of the things that was a little disappointing was that the only way for us to have known about this was to take a look at the Board of Governors agenda, and that’s not the appropriate place for students to hear about increases in tution.”

According to Davis, who sits on the Board of Governors, the increase in fees is a matter of financial necessity.

He points out that the province does not provide a grant to the university for international seats, and that the grant for domestic students has remained flat for years despite institutional growth and cost increases.

“It’s just a simple numbers issue,” says Davis. “When you look at what it’s going to take to support the international students that we already have and predict we will have … and in order to be able to meet the priorities that we already have for our budget for the university … we have to raise the fees.”

He further explains that domestic tuition will be raised by two per cent this year as well, as it has annually for the past several years.

“[Raising tuition is] the only way we can generate the revenue that we need to run the university, meet our obligations, and meet our strategic priorities,” says Davis.

As has been the case for universities across the country, 2017 saw a massive increase in international student enrolment at KPU. A talking point during the Board of Governors meeting was that, as the number of international students has increased, many of them have been taking fewer classes per semester, lowering the net revenue the university gets from international seats.

The reason that international students at KPU have been taking fewer classes is partially due to classes filling up and students not getting into the courses that they need. Davis says this means that the university needs to hire more instructors to offer more classes.

“We kind of got caught by surprise by the large increase this year and we were not prepared to meet that demand in a better way. We want to be able to do that,” he says. “If we don’t raise the fees, there’s a danger that we won’t be able to provide the quality service that we want to provide and we’re going to start going into a deficit.”

“There’s this myth in higher education that international students come here with pockets full of cash and they’re able to sustain themselves here and live lavish lifestyles and really be able to afford tuition no matter how expensive it is,” says Singh. “But the truth of the matter is that a lot of these students really have to make ends meet to be able to come out to Canada and access education.”

Singh is disappointed that the student body wasn’t actively informed of the decision. Historically, the university has let the KSA know in advance about decisions that will affect students. In this case, KSA councilors only found out about the impending vote when the agenda for the board meeting was posted a week before it was held.

Davis says he is surprised that the KSA didn’t know more about the increase earlier and says he will “circle back to find out why that notification wasn’t given.” He says that he suspects wires were crossed between the university administration and the student association somewhere in the communication process. The international students office was well aware of the decision, he says.

UPDATE: The Kwantlen Student Association put out a press release on April 5 in protest of the Board of Governors’ decision to raise international tuition.