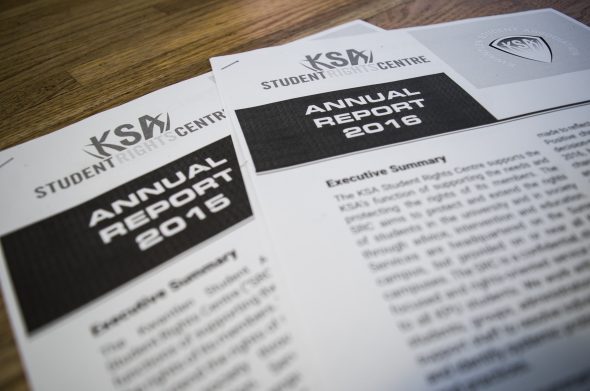 Copies of the SRC reports from 2015 and 2016 are now publicly available at kusa.ca/studentrights/. (Braden Klassen)

After years of delay, the Kwantlen Student Association has publicly released its Student Rights Centre reports for 2015 and 2016.

The documents list the complaints of students who contacted the KSA Student Rights Centre because of troubling experiences they had with Kwantlen Polytechnic University in 2015-16. They also make soft recommendations to the KPU administration for how to improve its framework based on that feedback.

The KSA is currently compiling its Student Rights Centre report for 2017 but has given no indication for when exactly the new document could be released.

The student association began the process of creating the reports in 2015 as a way of bringing student concerns to the attention of the university and enacting positive change.

“We’re not trying to be confrontational or give students negative hope,” says KSA VP University Affairs Murdoch de Mooy. “We’re just trying to highlight that these are some of the situations we’ve had in the past and this is how we can all work together to improve.”

While the fact that the documents are several years old means that much of the information contained in them is now out of date, they do provide snapshots of the issues that KPU students were facing at the time. The issues identified in the reports, when compared with how the university operates in 2018, can offer important context for how it has changed in response to student feedback.

“Not everything is perfect. We’ll always have room for improvement,” says de Mooy. “Even though the university did not have any of the annual reports to work off of, they did make improvements between 2015 and 2016 out of their own processes. Our hope is, as time goes on and we make these reports annual … that the university in and of itself can take these criticisms and these highlights of certain particular issues and they can acknowledge them and help develop things further.”

Both of the reports identify issues in the Faculty of Health. The Student Rights Centre received 15 complaints regarding the faculty in 2015 and 19 complaints in 2016. These figures are significantly higher—relative to the number of students in the faculty—than any of the other faculties at the university.

The 2015 report also points to a flawed academic appeals system in the department. Students in the Faculty of Health exclusively are required to appeal failing grades with the College of Registered Nurses of British Columbia rather than with KPU itself.

The university’s academic appeals system in general was a major focus of both reports. The system primarily received criticism from students for its lack of transparency.

When the 2015 report was written, the way the system was meant to work was as follows: Once an instructor had identified an apparent case of cheating or plagiarism, they reported the incident to the associate dean who then chose whether or not to take disciplinary action. From there, the disciplined student could appeal to the dean of their faculty, who could choose to send the appeal along to the university senate’s academic appeals committee. The issues that students reported stemmed from the perceived lack of transparency with this process, as reasoning for the decisions made in regards to the appeals is not publicly disclosed.

The university adjusted its academic appeals system last year, with the changes going into effect in May 2017. The Student Rights Centre’s 2017 and 2018 reports should shed light on whether or not these changes have fixed these issues.

The reports also documented complaints about the Services for Students with Disabilities Office. Criticisms of the SSD office included an inefficient system for registering students with disabilities and difficulty with getting those students the accommodation that they need, which often required specialist documentation that could be difficult to acquire. The process of registering as a student with a disability could take up to six months at the time that the 2016 report was written.

As with their academic appeals system, KPU has made efforts to address issues faced by students with disabilities. The university hired a new SSD coordinator early in 2017 and tasked them with changing the model used in the office to be more inclusive and in line with modern practices.

Last summer, KPU Vice Provost Jane Fee told The Runner that the university has shifted to a more holistic approach to offering disability services. This approach, she said, includes better communication with students and other departments of the university to make sure that accommodations are better implemented. According to Fee, students can expect to get a meeting with an SSD representative within a week of contacting the office, while receiving accomodation for their disability can be expected about a week after the meeting.

Between the two reports, the Student Rights Centre has identified more than two dozen issues that have been experienced by students across the university. De Mooy says that the KSA is hopeful that it will be able to release the 2017 report more quickly than its predecessors, and that the 2018 report should be released even faster as the KSA continually improves the process of compiling and reviewing them.

The value of these reports is that they show how well KPU is addressing the issues that its students identify to the Student Rights Centre. Whether the reports indicate steady progress in student satisfaction by an ever-improving institution or show the same issues reappearing year after year remains to be seen.