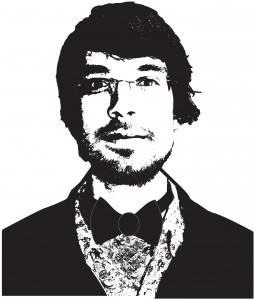 In the summer of 1993, in between shifts of cloning dinosaurs, a crack team of scientists made a startling discovery in the entirely unrelated field of primate mating habits.

The scientists discovered a tiny, fossilized, guitar that male lemur-like animals—early ancestors of today’s primates, called Notharctus—used to seduce potential mates from the heights of a tree branch.

Fifty million years later, not much has changed.

For reasons that still baffle scientists, the sound of a guitar being softly strummed to the sounds of Jack Johnson or John Mayer, or grooving psychedelic jams like Jimmy Page or Jimi Hendrix, it’s a fact that this method of aural seduction will work for guys.
Bonus points if you can actually sing along to whatever you are playing, especially if it’s soulful.

But not everyone is musically inclined.

Luckily, the tried and true guitar method is only one of a variety of ways in which to lure a lithe female lemur onto your chosen tree branch (not that one).

While 50 million years ago, gathering fruit and insects would have been a sure win, males in our time must master the use of fire.

In other words, learn how to cook, you uncultured greaseball.

Make a quick pasta dish with spaghetti, garlic, chilli, olive oil and white wine. Pair with a salad of figs, green and purple basil, prosciutto ham, shaved parmesan, and butter lettuce, lightly dressed with a honey-lemon vinaigrette.
There is nothing sexier than a lemur that can cook.

After dinner, try a little something called “conversation.”

Any guy who is capable of conversation is deemed a worthy mate, since it is a fact that most guys completely suck at communicating.

Steer clear of topics like sports, cult movies and eclectic albums, and talk about your feelings and her eyes. She’ll love it.

And while you’re staring into her soul, you can show off your huge muscles.

But be careful, because if you go to the gym regularly, there is a 75 per cent chance that you own a sequined hoodie, made by that faux tattoo art clothing line.
It’s a plus to have good fashion sense, but expensive doesn’t mean nice, you’re just a douchebag, and girls don’t like douchebags, so don’t wear sequins.

If you can’t fight your attraction to bright, gawdy things, try buying her some red roses before you meet her for dinner.

Flowers say those things that you don’t know how to say or are just scared of saying. And after the meal, serve up some chocolate.

Chocolate is sexy and smooth, and you will be too if you buy her some that’s good quality.