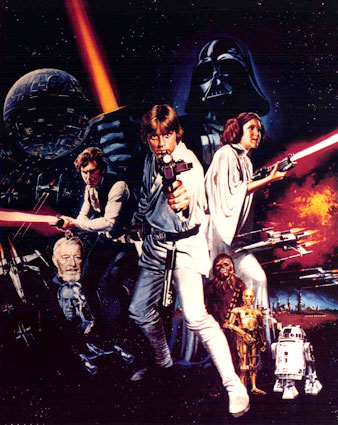 For more than 30 years the Star Wars saga has been entertaining people all over the world. From the badass lightsaber fights to little fuzzy Ewoks to princesses in golden bikinis, Star Wars has something for everyone.

Have you ever cheered as loudly as when Luke put some serious hurt on Vader at the end of Return of the Jedi? Or wept as deeply as when Han was frozen in carbonite and taken away by the Fett man?

Ok fine, pretend like you have no clue what I’m talking about. But let’s say that you need further proof as to why Star Wars kicks ass. How about this, there’s always a Star Wars character that everyone can relate to.
—
Have you ever felt like you didn’t belong somewhere, that your talents were unappreciated and your personal growth was being kept on a short leash? Well it just so happens that you share the same sense of limitation as none other than Luke Skywalker. Indeed young Skywalker also started out stuck in a nowhere job on a nowhere planet, but look at him now, he’s off on the other side of the universe bitch-smacking Sith Lords and blowing up Death Stars. It took the brutal slaying of his aunt and uncle to inspire young Skywalker to take up the lightsaber, but that’s beside the point.
—
But maybe that’s not you, and you’re more of the weird, loner guy/gal that nobody understands. People avoid eye contact with you and you wear the same long-flowing robes day-in and day-out because you think they make you appear more ‘enigmatic.’ Well you are pure, 100 per cent, unadulterated Obi-Wan Kenobi. Looking past the whole ‘old man’ thing (that’s only skin deep), Obi-Wan was a badass lone wolf of the coolest variety. When he wasn’t wandering around scaring off bands of armed thugs (see: Tusken Raiders) he was pulling off some crazy ninja skills aboard super destructive space stations. To top it off, Obi-Wan didn’t let a small thing like death get in the way of continuing to converse with the living. Mortality ain’t got nothing on him.
—
Kenobi and Luke don’t fit your lifestyle? Maybe you prefer to go around choking people and blowing shit up for the sake of it? Maybe you have some oppressive boss who you’re fed up with to the point that you want to throw him down a near-bottomless pit? Well, friend, I’ve got two words for you: Darth Vader. Emperor aside, this guy doesn’t take shit from anyone. He stomps around the galaxy crushing rebellions, fighting Jedi and engaging in dogfights in space. While he may come off as a bit of a hardass, Vader is also a devoted family man and looks out for his kids. Oh yeah, and he also stops laser bolts with his HANDS. Eat that Greedo.

—
Raised by royalty? Think you’re entitled to everything? Enjoy kissing your siblings ‘for luck’? You my friend, are Princess Leia. Like every other princess in every other story, Leia gets taken prisoner in the first ten minutes of the first film. Though don’t get me wrong, Leia isn’t a pushover. This feisty little hellion leaves a trail of dead a mile-long by the end of the third movie. Like Vader, she doesn’t take shit from anybody. Hmmm, maybe they’re related?

Perhaps you’re not like any of the above though. Maybe you hate pretty much everybody, and have no qualms with killing for a bit of dough? Boba Fett be your name, bounty-hunting’s your game. This guy would rather let his gun do the talking, and he isn’t afraid of anyone. Need to get somewhere in a hurry? No problem when you have a goddamned jetpack strapped to your back. This guy was the epitome of cool, and sorry nerds, he’s not overrated.

I’m out of space, so I guess I’ll just throw out a list of random Star Wars characters/things, and you can pick whichever one you identify with most: Lando, Yoda, Tauntaun, IG-88, Chewbacca, AT-AT, Han Solo, Bacta Tank, Palpatine, Hoth, Wedge, Sarlacc.

Reading the book before its film adaptation should make a comeback