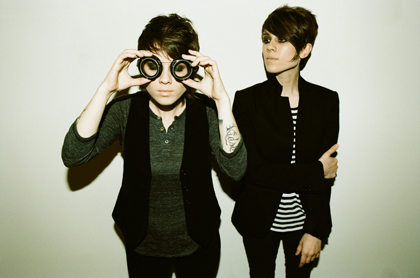 If you got to see Tegan and Sara recently at one of their two Vancouver shows at the Orpheum, you are probably still laughing about it. I for one, have never laughed so hard at a concert in my life. While a lot of their songs are pretty serious, Tegan and Sara managed to provide comedic entertainment that kept the crowd laughing the entire evening. If someone were to yell out something from the crowd, Tegan and Sara would respond to them with a quick quip, a funny story or even an insult, much to the delight of everyone there.

They also love to tell stories during their shows and they also love to bicker with each other. At one point they were fighting because Sara kept screwing up the intro to one of Tegan’s songs and in the middle of the yelling, Tegan burst out with “Everybody, Sara has asthma!” Sara then exclaimed that she wished she had a foot switch that could turn Tegan’s microphone off to which Tegan jokingly stormed off stage. Once Tegan was gone, Sara, with her razor sharp wit yelled out “YES, now I’m in my dream band” which got the crowd roaring with laughter.

Amongst all the fun, they did manage to find some time to sing. Since their songs are so short, they sang every popular song that they had as well as all of the new ones from their recently released album, The Sainthood.

It was so satisfying for fans because they really could not have sang anything else that would have made it a better show. They covered it all – from an acoustic version of their Tiesto remix “Feel it in my Bones” to their most popular tracks from So Jealous and The Con. Their encore even included five songs which was nice because I didn’t want the concert to end at all.

Some standout songs were “Arrow,” which they opened the show with, “So Jealous” which was extremely high energy, “The Con.” “Walking with a Ghost,” and fan favourite, “Call it Off.”

The music was amazing, the vocals were incredible, and hey, even if they fail at all things musical, they could always become successful comedians. All in all it was a fabulous show and anyone would have had a good time regardless if you were familiar with their music or not.