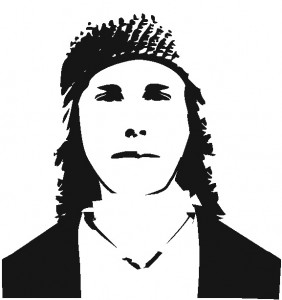 I enter the student lounge that fateful February evening and immediately grab a beer—two beers, off the serving-it-right-less cashier (I asked) and proceed to the reception desk. I am given a heart-shaped sticker with a number on it (simple identification purposes), a small blue pamphlet so that I, a speed-dater amongst speed-daters, can write down my choices for future dates, and a sheet of paper with various short descriptions to identify character/personality traits.

The organizers tell us to select the sheet of paper that has, boxes with statements such as, “Is an English Major”, or “Has a snake”, or “Takes the bus to school”:  all lame and far too G-rated for a speed-dating seminar that has four luscious amazons already double-fisting before the thing has even started.  The object here is to get as many peoples names written on your sheet under the appropriate heading in the fastest time. The first person to have their sheet full becomes the best (or most alcoholically inspired) mingler and receives a free beer courtesy of the KSA.

My thoughts were on things other than English majors and busing to school. The statements should have been written thusly to spice things up a bit: this person  “Has a nipple ring/tongue ring/clit ring/prince Albert/all three connected with a pleasurably tugable chain”, or “Has set of D’s”, or “Can’t remember the names of all their sexual partners”, or “Likes it in the ass”, or “Loves giving oral”, or “Hasn’t had sex in six months”, or “Is a virgin (way to put a target on yourself!)”, or my personal favourite, “Will screw after gin and a compliment”.

The “Has a snake” line is good; they were on the right track with that one, but the fatal flaw there is that the question was entirely wrong from the beginning. We are speed-daters, not soul-mate searchers.  Our minds were on one thing, sex!  Humping! Fucking! Shagging! Coitious! Boinking! Hiding the pickle! Playing the clitar! Blowing the skin-flute… and sure, making love is somewhere in there too—if you’re a sentimentalist. Just a thought for next time.

On a more serious note, although the first speed-dating seminar at Kwantlen was successful and the beers were cheap in the student lounge, a problem with this event is inherently evident: it simply does not cater to diverse sexual preference.  The homosexual community at our beloved university has not been represented here in any way.  Perhaps next time this can be taken, along with my suggestions, into more careful consideration.

Freshii using virtual cashiers should not be tolerated