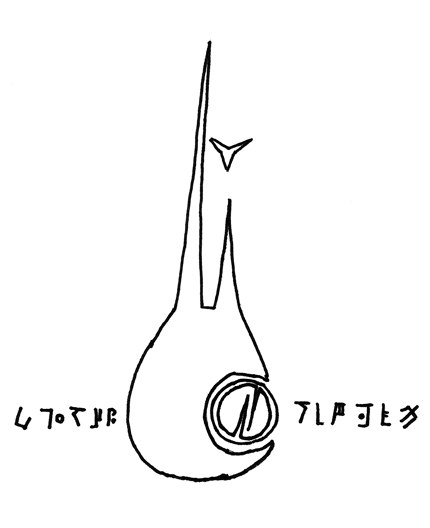 Moderation must be one of the natural laws of the universe, Vintis mused. The unforgettable night it had spent with Klezyp would have to be balanced by the most horrible day of its life.

“Good morning, Kyraa…” Vintis hesitated as it entered the office. The Izraal was nowhere to be seen. It was not like Kyraa to be late, but her presence never had any effect on Vintis’ work. It sat down and started the day, forwarding reports and filling out requisition orders. There was a shipment of J’r-made weapons that had been stopped at the starport, a cargo ship seized containing illegal engine upgrades and uncertified stardrive components, and an investigation of sabotage aboard a Pyryx freighter scheduled to leave in three week’s time, but nothing new or exciting to add spice to Vintis’ day.

“Vintis?” Klezyp’s holographic face showed the briefest hint of surprise. “I’m glad to see you. But isn’t the custom to call back the next night?” it asked. Vintis smiled and sipped the tasteless sub-zero liquid supplement it bought from the cafeteria.

“I wanted to see who’d call first,” Vintis chuckled. “But aside from that, I’m just having a slow day. Kyraa didn’t show up today.”

“That Izraal woman? I thought the bitch didn’t like you.”

“True. But it’s weird not having anyone working in the same office as I.”

“Well, things are rather dry here as well,” Klezyp, giggled as it checked over its shoulder. “I’m in a village on the opposite side of the planet. The population is a mix of Izraal and Ch’ch’ki, but counting them isn’t as hard as I’d hoped.” Klezyp sighed. “Ch’ch’ki have a hive mind. Every bug I asked said the exact same number for the entire planet.”

“Sounds dull,” Vintis considered its drink. “When will you be back?” it asked. Klezyp hesitated.

“Actually,” it stuttered, “I’m renting a room out here for the night. I was wondering if you’d like to join me?” it tried to sound seductive, but Vintis picked up on Klezyp’s anxiety. It narrowed its eyes at the screen. “Oh – I’d pay your transit, of course…”
“No,” Vintis said quickly. “I mean, it’s a lovely offer, but I’d like to know…”

“Why?” Klezyp finished. It actually sounded surprised this time. “Vintis, didn’t you hear?”

“About what?” it asked. Klezyp’s expression became worried.

“Vintis, there are demonstrators in the capitol,” Klezyp informed it. “Izraal. They march under banners bearing Jaxal’s name and are demanding that Kapilo be used by the Hegemony as a staging ground against the Pyryx Imperial Court!” Vintis ejected the liquid held in its gullet.

“What?” it asked. Klezyp looked over its shoulder again.

“I’m worried about you,” Klezyp pleaded. “Come to me and be safe.” Vintis considered the image of Klezyp’s face; its eyes were pleading, and its mandibles were emulating its worry. Vintis closed its mandibles tight around its mouth and crossed its arms. “Vintis, please…”

Klezyp sighed. “If you’re certain,” it finished before the call ended.

The moons were high in the evening sky when Vintis finished work. The air had a strange smell to it, as if something either was or had been burning. Its goggles hanging around its neck, Vintis retraced the route it took to the transit terminal in silence.
“Support the Pyryx?” Vintis was surprised out of its automatic route by the same protestor handing out pamphlet flexies. It was only now that it was able to recognize the petite, hovering J’r, a flexi gripped tight in her shaking tentacle. Vintis shook its head.
“The Imperial Court made it clear,” Vintis replied. “This isn’t the Zwitii’s war.”

“I’m afraid it is, Vintis,” the J’r replied. Vintis looked up at her and narrowed its eyes.

“How do you know my name?” it asked. The protestor shivered for a moment before she dropped her flexi and fled, her gas pores hissing as she rocketed away. “Hey – come back!” Vintis called. “You didn’t answer my question!” It sighed and picked up the flexi. Someone cleared her throat. Vintis turned and froze: standing behind it was a mob of angry-looking Izraal.

“That’s her,” the one in the lead pointed at Vintis. “That’s the bitch who got Jaxal killed!”

“Oh, great stars,” Vintis, muttered as the flexi fell from its hand. It turned and ran, using its long legs to quickly gain ground over the charging Izraal.

The Izraal accelerated quickly, forcing Vintis to leap over, under and around them as it sought a route of escape. It turned down a street corner and was knocked onto its back before it could recognize what it had hit.

“Kyraa?” it asked before her foot blacked it out.