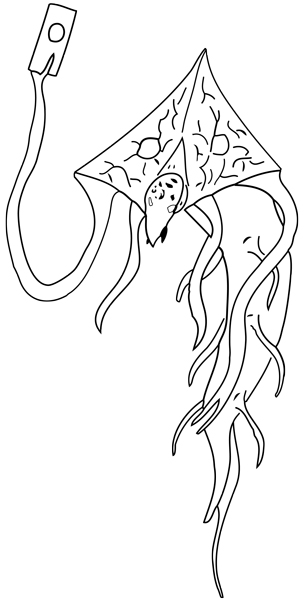 Izraal psychology was at a course at the local learning annex Vintis now felt it should have taken. It probably would explain all the pain it was in. On the other hand, maybe the Zwitii psychology course could help explain to it why that was the first thought that sprung into its head.

“Vintis? Vintis, can you hear me?” a voice inquired. Vintis couldn’t tell whom it belonged to. Now that it had some time to think about it, why wouldn’t a desire to understand why Kyraa and her Izraal cohorts beat it up be the first thing it would wonder about?It would be nice to have an explanation.

“Our equipment reads neural activity,” an unfamiliar voice droned in a trademark Jukkopo manner. “Relax, Mr. Klezyp. Mrs. Vintis will regain consciousness shortly.” Klezyp, Vintis mused? It took it a second, but the first voice had been Klezyp’s after all.That was comforting.

“Who did this?” Klezyp’s voice asked. There was a sound like water bubbling through a narrow channel filled with dead leaves; that was undoubtedly a trademark Jukkopo sigh.

“We have detained seven Izraal, including Mrs. Vintis’ co-worker, Mrs. Kyraa,” the Jukkopo voice replied. Vintis couldn’t help but feel a twitch of frustration. It wasn’t a woman!

“I knew that Izraal was bad news,” Klezyp replied. “Great stars!” it cursed. Vintis tried to move its fingers, only to find them sealed in a medical cocoon. Just what had Kyraa done to it?

“Regrettable? It’s downright appalling!” it refuted the Jukkopo. “I bet this is because of Jaxal.”

“Izraal are known for their passion,” the Jukkopo conceded. “They will turn on anyone or anything that shows even the slightest hint of betrayal. I believe the Hegemony is still having problems suppressing extremists even to this day.” Vintis concentrated. The Jukkopo was… male?

“If you two are done,” Vintis lisped when it realized its mandibles were bandaged up, “I happen to be in a considerable amount of pain.” It informed them sarcastically. Something heavy was suddenly pressed tight up against its chest. “Oh – hey! Now… I… can’t… breathe…”

“Oh, sorry,” Klezyp said as it removed itself from its hug. “How are you, Vintis?” it asked nervously. Vintis tried to move, but found that its fingers weren’t the only parts of it that were encased in medical cocoons.

“How do I look?” Vintis replied. The Jukkopo cleared his throat.

“The Izraal did quite a number on you,” he informed it. “They broke most of your bones, fractured your skull, caused severe internal bleeding… we arrived just before they had a chance to dismember you,” the Jukkopo informed it proudly. Vintis coughed.
“Lucky fucking me.” It snorted. Klezyp offered a nervous laugh.

“Dr. Alzorx informs me you’ll be fully healed by the end of the day,” Klezyp said softly, the closeness of its voice warm on the exposed skin of Vintis’ cheek. Vintis tried to smile.

“This may seem strange,” Vintis asked, “but could you give me a ride home?” it asked. Klezyp and the Jukkopo, Alzorx, sighed.

“I had another idea,” Klezyp continued. “In two days’ time, I’m leaving Kapilo for the colony on Uixynki.” It hesitated. “I’d like you to come with me, Vintis.” Vintis coughed as it considered the words.

“Leave Kapilo?” it asked. “I bet the local Izraal would love that.”

“Damn it, Vintis, this isn’t about pride!” Klezyp snarled. It took in a deep breath. “I’ve… I care for you, Vintis. I can’t sleep right knowing you’re on a world with hostile aliens.”

“But I’ll be travelling light,” it continued, causing Klezyp to let out a little gasp of excitement. “I’m afraid I don’t have any possessions to pack. It seems someone ransacked my apartment.”

“Easy there, Klezyp,” Vintis whispered. “I care for you, too.”

It wasn’t too sure, but it thought it felt Klezyp place a little kiss on its cheek.