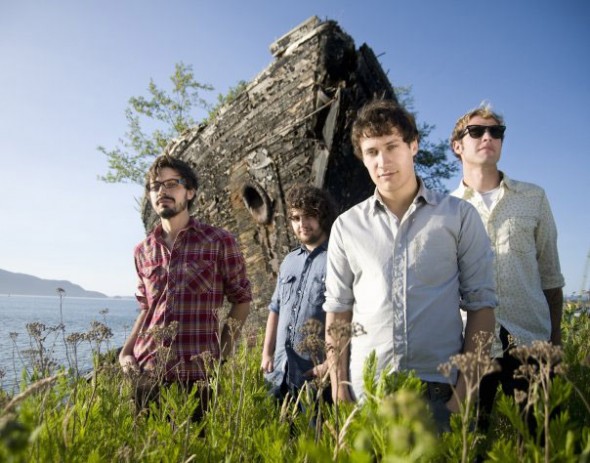 The Lonely Forest
SELF TITLED
(Trans)

Anacortes band, The Lonely Forest, is something of a phenomenon in the Seattle scene right now. Hell, they’ve even attracted the attention of Death Cab for Cutie guitarist Chris Walla, who signed them to his Warner Music/Independent Label Group imprint, Trans. Listening to their self-titled debut release, I can see why.

The Lonely Forest is John Van Deusen, doing triple duty as the band’s singer, guitarist and keyboardist; guitarist Tony Ruland, drummer Braydn Krueger; and bassist Eric Sturgeon. Their self-titled, digital-only EP is due out on iTunes September 14. Produced by Walla in addition to being released on his label, it’s a preview of their upcoming full-length, Arrows, which will be released early 2011.

The first track off the EP, the anthemic, possibly reverse-psychological “Turn Off This Song and Go Outside,” is a fitting opening to their first release on Walla’s label, with more than a passing resemblance to Death Cab’s early output.

While Van Deusen’s delivery in “Turn Off This Song and Go Outside” is reminiscent of Ben Gibbard’s, the song’s soaring harmonizing in the chorus certainly makes an impact on the listener.

The following track is a forlorn, Grandaddy-esque song called “Ramshackle House,” driven by backing vocals on sustain punctuated by piano chords, quickly segues into the third “Live There”, a veritable love song to their Cascadian home of tall evergreens, the smell of the ocean and cool mountain breezes. Though the song is slightly pedestrian on its own, the contrast provided by the more experimental “Ramshackle House” buoys “Live There”, especially when both are so thematically similar.  Taking the lyrics literally, the two songs together are a clever play on the band’s name.

If “Live There” merely states the Lonely Forest’s Northwestern allegiances, the dynamics of the fourth track, “Let It Go,” pound it home. Craggy riffs and chiming, gently soaring harmonics frame a story of closure, acceptance, and possibly a young life cut short.

The EP ends with an acoustic reprise of the first track, which distils the energy of the opening, serving as a fitting coda to the whole affair. Whether you think the Lonely Forest is being sincere or just precious, you can’t deny this first effort on a (quasi-)major label is pretty damn tight.