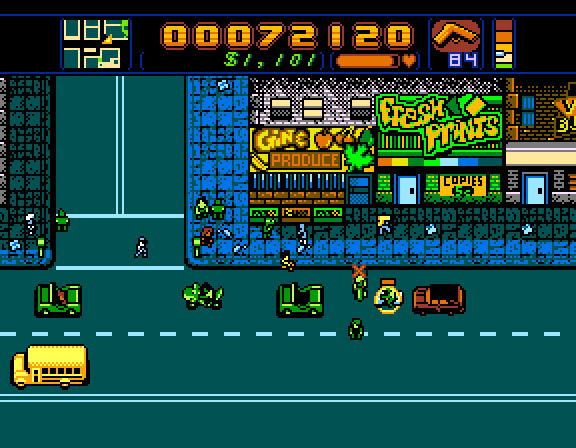 For the past few years, the Penny-Arcade Expo (or PAX, for short) has been attracting legions of video game developers and their proposed clientele.  Whereas the Electronic Entertainment Expo (E3) is almost entirely for the press and media, PAX is an expo for the actual fan base.

Over the years, PAX’s most reputable offerings have been the independently developed games shown off on the convention floor – PAX 10 was no exception with VBlank Entertainment’s Retro City Rampage.

Brian Provinciano (creator/ owner of Vblank Entertainment) describes Retro City Rampage as an “open world action parody […] Grand Theft Auto on the NES in 8-Bit, mashed with everything else.  So you can jump on enemies like Mario, you can pick them up and throw them, you’ve got weapons like a bionic arm, spread shot sight, light gun, and power ups even, so you got a suit you can fly in and speed shoes so you can run really fast and plow through people.”

In the first level, you pick up a bomb from someone in an antennae’d blue helmet, and drive through a very green hilly zone while being laughed at by a sadistic dog that pops up out of bushes when you run over someone.  The game’s personality really shines when the local crime boss Jester taxis your character (named Player) out of a bank on a yellow school bus, only stopped by the same traffic that flattened a poor frog onto the pavement.  Before stealing a certain time traveling booth (and being met by a most eccentric doctor), your progress is hindered both by a curious group of anthropomorphic turtles bearing weapons, a dude named ‘Magnum T’  and a red and a blue guy from a helicopter.  All without any apparent copyright suits.

Essentially, it is Scott Pilgrim vs. The World vs. Liberty City.

As ridiculous as this game seems to be, it even evolves its genre (however slightly) with actual cover mechanics – something not even the latest drop-down GTA game, China Town Wars, had.  You can even shoot diagonally!

What makes this game even more exciting is the talent behind it; Brian Provinciano, a Vancouver resident and apparent aficionado of ‘90s pop culture.

River City Ransom is currently being billed as a WiiWare title, but has been promised to release for at least one more console.  I do pray this game is released en masse, nor only for myself to enjoy it, but because Brian and this entire independent developer scene deserves the money as well.

It is also confirmed that there will be Doctor Who references in the game.  And that is awesome.