Three cheers for The Zalm 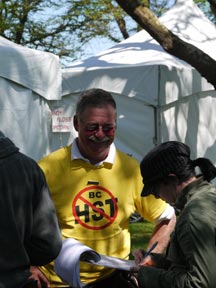 Since former premier Bill Vander Zalm started his crusade against the Harmonized Sales tax, B.C. has seen a grass roots political movement that has been desperately needed in this country.

It didn’t really matter what the issue was. It could have been our suffering medical system (of which my girlfriend and I waited two-and-a-half hours the other day to see a doctor), an education system that is closing schools and laying off teachers or the need for affordable housing in Vancouver.

It was none of these.

The Zalm decided to lead the charge against the thing that enrages people in this country the most – taxes.

If you notice a hint of sarcasm you’re right.

I don’t think any of our politicians (former or current) have ever fought this hard for something. But I digress. This isn’t about our lazy politicians and their empty promises – well I guess it is since Ol’ Gordo told us the Liberals wouldn’t be bringing in the HST.

What this is really about is Canadian citizens finally rallying together and holding their elected officials accountable for the decisions they make.

Who cares what Vander Zalm’s motives are. He lit the torches and handed out the pitch forks to the docile mob that is the Canadian public.

Canadians whine and moan about their politicians being liars and not representing the voters, yet we do nothing about it.

We are incredibly lucky to live in a country where we can protest things like the Olympics or the G8 and not be sent to the Gulags.

I really hope that Vande Zalm pursues this to the point of a recall.

So to Mr. Vander Zalm I give three cheers. You have fired up the Canadian people in a way that I have not seen in my lifetime.

Other politicians take note. This sort of grassroots political movement is exactly what we need in this country.