On Saturday April 9 in Langley’s The Venue, three local bands teamed up to take the stage. 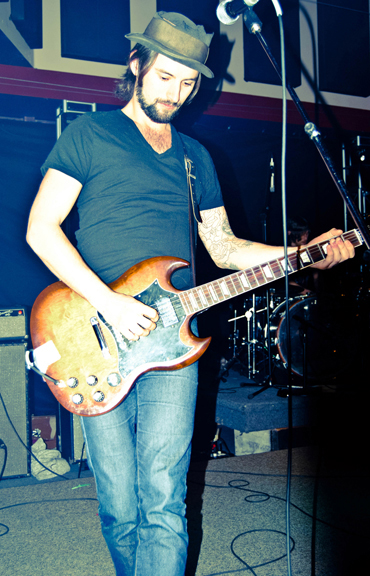 The band’s organic sound is a great addition to the Vancouver music scene and leaves the Kodiak Nightlife with great potential to continue on with their musical endeavours. The band has many ranges with their guitars, drums, piano, and vocals which leaves no song dull or sounding the same. Their soft and airy music is a perfect addition to your summer playlist while cruising along the beach.

Second to grace the stage was electric rock band, Cruel Young Heart. This band sounds similar to 30 Seconds to Mars and Angels and Airwaves. The futuristic sounds from the band lingered into the audience’s ears as members tapped their toes to the catchy chorus. They had matching suits and colour coordinated with black white and red. I couldn’t help but reminisce about the White Stripes. Additionally, the bands song “Nighttime Glow” has the potential to become a radio hit. Cruel Young Hearts closed their set with fog, starry lights, choreographed dances and friends jumping on stage. The band left the crowd in a high and was the perfect introduction to the final act of the night.

Bend Sinister took the stage and wowed the crowd with their powerful jazz rock feel and smooth vocals. The first time I saw this band was at the Surrey 2010 Celebration site and they immediately blew my mind. They introduced the audience with many new songs, but also played the classic hits such as “Time Breaks Down” and “The Same Things”. Describing this band is challenging because it is unlike anything in current popular music. If Elton John had a baby with traditional jazz and then had an affair with rock and roll, Bend Sinister would be the outcome. I highly recommend having a listen to this band. They bring their soul sound onto the stage and never cease to disappoint.