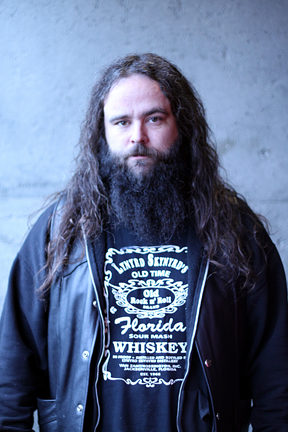 Shane Clark, one of the two guitarists of 3 Inches of Blood, seems entirely at home within the Rickshaw Theatre’s crimson walls overlooking a line-up of metalheads down East Hastings Street.

The Victoria-based band has had success throughout British Columbia, with a loyal fanbase and a sell-out crowd waiting to get inside.

He kicks up his feet outside the venue’s washrooms and casually discusses the band’s themes of ancient history and mythology that are rampant in the band’s discography.

“It’s more just the escapist vibe that we have,” he said of the lyrical content. “It’s the same as seeing a movie or reading a book. It’s taking you away for a story.”

Throughout the interview, he scratches his gnarly beard, which closely resembles the facial hair of the Vikings, wizards and pirates that vocalist Cam Pipes sings of.

While Clark’s outward appearance may frighten small children – he joked that mothers take their children aside – he and his bandmates are five cool-headed guys. They write songs about fantasy because reality isn’t as interesting and they don’t have a message to push.

“There’s bands who have that social or political or even religious agenda that they want to tell people,” he said. “I’m not knocking it, but it’s not where we’re coming from, not what we’re into.”

It’s mere hours before their Vancouver stop on the Metal Alliance Tour and the rest of the band is doing soundcheck in the background.

With seven bands on the line-up – ranging from hardcore punk to Christian death metal – no subgenre is left untouched on this outing.

“A diverse bill is interesting for the fans too,” said Clark. “Seeing a bill that’s, like, Cannibal Corpse and six bands that sound like Cannibal Corpse gets kind of boring.”

Furthermore, the band is touring on a new album, Long Live Heavy Metal.

Influenced by British steel and Bay Area thrash among other genres, the disc hits as hard as their last four, giving long-time fans a solid dose of double-kick and electric riffage. It features Part IV of “The Boiling Sea” episodic swashbuckling tale, a rock ‘em sock ‘em hockey anthem and an acoustic instrumental with a flute part that sharply contrasts the album’s other 11 tracks.

“I’ve always been a fan of cool interludes within albums,” he said, citing examples from Metallica, Black Sabbath and Overkill. “It’s really good to just have peaks and valleys within your record.”

One of the stand-out songs is “Leave It on the Ice”, a hockey song that rivals Anvil’s “Blood on the Ice” and is a little louder than Stompin’ Tom Connors. It may not be the Hockey Night in Canada theme song, but it ought to be.

“At first I was like, ‘eh, a hockey song’, but it fits in really good for the echelon of our songs involving battle and brotherhood,” said Clark, who by the way is a fan of the 1982 Vancouver Canucks.

As for the rest of the album, Clark said things just fell into place. Pipes’ Rob Halford-like falsetto vocals make the band’s sound reminiscent of Judas Priest, with “Metal Woman” showing signs of “The Hellion” and “Leather Lord” carrying the same energy as “Painkiller”.

Having performed in Vancouver extensively the past few years, the band skipped classics like “Deadly Sinners” and “Destroy the Orcs” in favour of new tracks like “Dark Messenger”. But no matter what they play, the hometown crowd is sure to do as Clark hopes: “I expect them to go nuts and hurt themselves and have a great time.”