Local DIY favourites wrap it up in style.

A couple of weeks ago, I saw the Apollo Ghosts for the last time. They, along with their brethren in Vancouver’s do-it-yourself music community, were the soundtrack to a good portion of my university years. Projecting a genial effortlessness, the Apollo Ghosts’s brand of punk-tinged power pop was accessible without being inoffensive, sweet without being cloying. But it was the Ghosts’s humility and deep connection to the local DIY scene that made them special – though it helped that they were very competent musicians, their music good enough to move a blogger from Brooklyn, Ryan Catbird, to start a record label just so he could put out their debut album and to be nominated for the Polaris Music Prize. 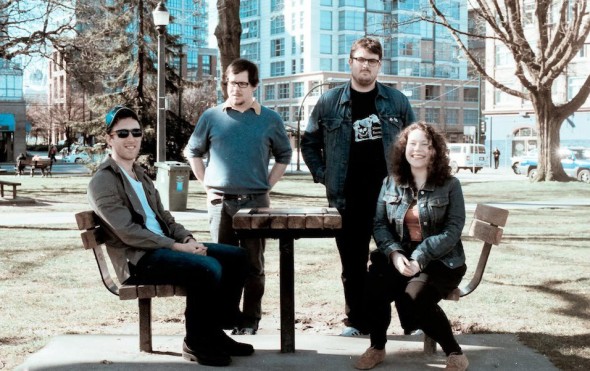 Success (however moderate) never got to their head, though, and their good nature and talent carried them through five years, three full-lengths and innumerable performances. But with day jobs and other projects competing for the Ghosts’s time – frontman Adrian Teacher is, well, an elementary school teacher, as is drummer Amanda Panda, while guitarist Jay Oliver and bassist Jarrett K. play in other local bands – the ride couldn’t last forever. But it was hard to believe at first. When the Apollo Ghosts announced they would be hanging up their gloves in December as they released their last single, “Nightwitch,” I must admit I didn’t take it seriously at first – but the reality slowly revealed itself. When they announced their last show, which was slated for May 10, I made sure I wouldn’t miss seeing them off that night.

I made it to the Rickshaw just in time to catch post-punkers Diane, the first act of the night. Featuring Mel Zee, Katie Gravestock and Ben Goldberg, Diane dealt slack, pummelling riffs to a mildly, miraculously receptive crowd, even though Diane seemed a little bored on stage. I was a bit bored myself. That said, Diane are not a one-trick ponies;  the members of Diane have their fingers in other pies, most notably Katie Gravestock, who also plays in the band PUPS with the legendary Rose Melberg (best known for such seminal Pacific Northwest indie pop bands as Tiger Trap and The Softies.) It was a pity, then, that I wasn’t feeling Diane’s performance that night.

Diane soon left the stage, and the still-small crowd was treated to some Watermelon – not the tasty berry-type fruit, but the White Rock-bred slacker-pop trio. Though guitarist Thom Lougheed’s tone started off clean, almost folky, eventually the flanging, effected guitars of Watermelon’s latest releases (especially the Cassette EP) manifested themselves in a sweet, delicious burst of noise.

The Runner reviewed the B-Lines many, many moons ago, making bewildered remarks about their legendarily chaotic live show. They haven’t changed. Even while on the Rickshaw’s ridiculously high stage – it’s not very punk rock to be standing a metre-and-a-half above everyone – frontman Ryan Dyck paced and strutted across the stage like a caged hyena, climbing on speakers, kicking over beers left in front of the stage, much to the bewilderment of the beers’ owners.

“Apollo Ghosts asked us to play their show because they’re so nice and we’re a bunch of assholes,” Dyck said between punk salvos the size of 7″ singles. B-Lines might be assholes, but they’re fun assholes, ready to start a pogo party at a moment’s notice.

Still, the  B-Lines’s set was a mere prelude to the Apollo Ghosts, who made quite an entrance. One by one, the Ghosts triumphantly entered the stage, like joyous wrestlers. Seemingly packing five years of shows into one night, the house was packed with folks seeing off the Ghosts – some locals, some from the Island (Teacher himself hails from Nanaimo) and some from even farther away. Teacher was wearing his signature blue cape, some people were dressed up in ghost costumes, seemingly everyone was singing along to the Ghosts’s songs, and there was a constant stream of crowd-surfing fans riding above the sweaty, warm, beer-soaked audience.

The Apollo Ghosts always were great at including the audience in their performances, and their last show was definitely no exception. Among other things, the Ghosts had invited an audience member, who won a contest on CiTR radio, to perform Landmark’s “Why Can’t I Be The Man on Stage” with the band.

The Ghosts’s set list was packed too, with the band seemingly playing their whole discography, from their last LP, Landmark, through to old favorites from Mount Benson and Hastings Sunrise, their debut, along with a handful of singles. The Ghosts played encore after encore until the very end, when they played tender renditions of some of the first songs they wrote, Hastings Sunrise‘s “Shadow Boxing Bruce Lee” and “Dobermans.” Nobody wanted it to end, but it had to. One thing was certain: it was a heck of a way to go out.