A society of George Zimmermans

By The Runner
[editorial]

The shooting of Trayvon Martin is proof that America’s problems with race are far from over. The 17-year-old’s death was as unexpected as it was tragic. So how is it that the man who admits to shooting him walked out of court acquitted of all charges? 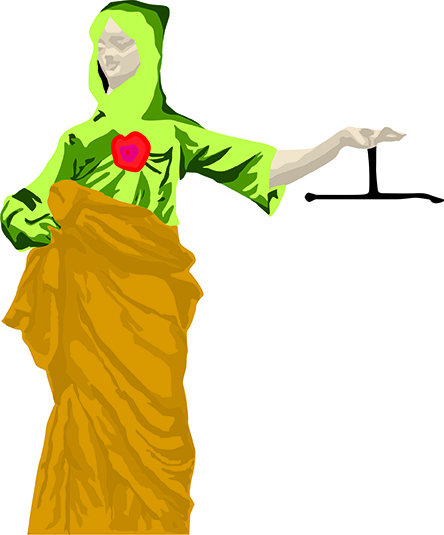 On the night of Feb. 26, 2012, Martin was walking home when George Zimmerman, a volunteer member of the neighbourhood watch, deemed him suspicious and called 911. The operator advised Zimmerman to stay in his vehicle and not approach Martin; instructions he ignored. The resulting altercation ended with Zimmerman sporting lesions on the back of his head and a broken nose, and Martin with a bullet in his heart.

Zimmerman claimed self-defense, referencing a Florida law referred to as “stand your ground,” which allows citizens to “meet force with force” when they feel their lives are being threatened. On July 16, the jury sided with Zimmerman, agreeing he was not guilty of the charges laid against him.

Of course, Zimmerman wasn’t exactly standing his ground. He was the instigator in this situation, driven to confrontation by … what, exactly? If he had not approached Martin, then both men would still be living their lives, unaware of the other’s existence. In the year since the shooting occurred, there has been a public outcry from those who believe the shooting was the result of racial profiling.

While the judge ruled that prosecutors could not claim racial profiling without concrete proof, which, given the lack of witnesses, would be hard to come by, it would be wrong to think this case had nothing to do with race. It is nearly impossible not to wonder what would have happened if Zimmerman had seen a white teenager wearing a hoodie that night. Was his suspicion aroused by Martin’s skin tone? What could have marked a lone figure walking through a suburban neighbourhood different from any other? If Martin had been armed and stood his ground, shooting Zimmerman first, would he have been acquitted?

One only has to do a quick search of “Trayvon Martin” on any social media or news site to see that, while there may not have been concrete proof that this started as a race issue, it has certainly evolved into one. The shooting and subsequent trial opened up dialogue for the outrage and fear felt by African-American communities. People are engaging in discussions and demonstrations that are as much about Martin as they are about their own feelings of oppression.

Demonstrations demanding justice nationwide may be garnering attention, but they only represent one side of the discussion. As soon as Zimmerman went on trial, so did Martin.

Media outlets and blogs began reporting on Martin’s past, highlighting a suspension from school for drug possession and showing images of him wearing grills – an accessory which marks an African-American as “thuggish,” but on Miley Cyrus is “bold.” These snapshots of Martin’s life were paraded around as if they somehow justified Zimmerman’s actions. If the public could be convinced that Martin fit the African-American stereotype of a gangster, then they could be convinced that it was only a matter of time before someone shot him. As if a ten-day suspension from high school had anything to do with how Zimmerman saw him that night.

It wasn’t just Martin who faced scrutiny during the trial. Rachel Jeantal was on the phone with him that night, their last conversation included Martin’s concerns that he was being followed. Jeantal’s time on the stand resulted in a social media storm of what can only be described as racially fueled bullying. Bloggers critiqued everything from her body to her word choice, some going so far as to call her Precious in reference to the 2009 film about an illiterate girl from Harlem.

That this trial drew an audience of spectators determined to see the victims of a crime as somehow deserving of what happened to them should tell us something. Martin and Jeantal were dehumanized and their experiences erased, reducing them to characters in a cliché drama. When Jeantal was read as “ghetto,” it became okay to disregard her story. When Martin was portrayed as a druggie and a thug, it was okay that he was killed. That society has such a low opinion of roles traditionally assigned to people of colour is proof that racism is alive and well in North America. Maybe it isn’t the time for African-Americans to say, “I am Trayvon Martin.” Maybe it’s time for the rest of society to realize they are George Zimmerman.