Morocco’s city in the sky 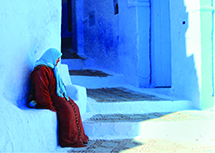 Nestled in the Rif Mountain range of Northeastern Morocco lies the 500 year-old city of Chefchaouen. Blanketed in every possible shade of blue, it is famously sought out by those wishing to see a place where the sky bleeds into the streets.

The town was originally founded in the 1400s by displaced Jews and Muslims during the Spanish inquisition, and is decorated in their style. Pale periwinkle to bright azure mix together in the streets of the medina, creating a sense of being amongst the heavens.

As Chefchaouen is very old and many of the houses in the mountain city don’t have numbers, properties are differentiated by decorations on the doors that range from plain to ornately mosaicked.

Blue permeates throughout, but different religions decorate distinctively. Interspersed in alleyways are green for Berbers and brown wood for the small Jewish population still living in the city.

Whatever the religion, no door looks the same.

Like the decorations, Chefchaouen’s culture is varied, with a unique blend of customary and progressive. Older generations customarily wear traditional garb—one can see elder ladies herding their goats up the mountainside in long, textured skirts and multicoloured hats- while the younger opt for a more western style of dress.

Marijuana and hash remain Chefchaouen’s biggest exports, and of course a chief draw for tourism. Trekking up the mountains and wandering about the abundant fields of hash is popular among foreigners. Many farmers are willing to give tours and, for a small fee, describe how it’s grown and produced in the fields incapable of growing much else.

Although the substances are still heavily illegal in Morocco, Chefchaouen locals will whisper, “hash, weed,” in your ear as you walk the labyrinthine streets, making your way through a myriad of goods and stalls.

The streets were not designed for navigating effectively. But getting lost down side streets isn’t so bad when they’re painted in a hue so vibrant, they’re almost florescent.

And neither is finding yourself above the city, listening to the many mosques emitting the call to prayer while locals and tourists alike smoke hash and revel in the eeriness of the reverberations echoing through the city, making it come alive.

Chefchaouen is a place not to be overlooked while travelling Morocco. Here, Islamic and Western cultures blend seamlessly, lending to a unique perspective on life in the Blue City. 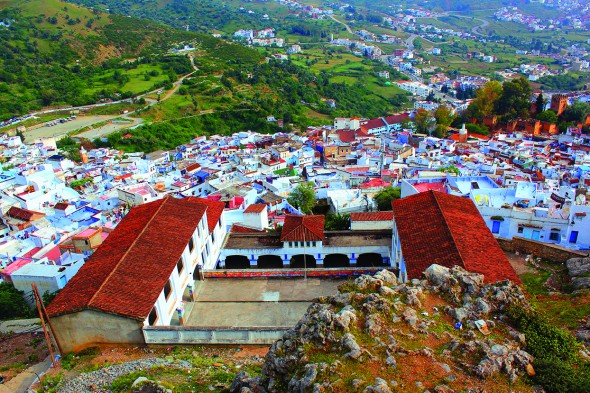