It may not be the end of the CFS referendum at Capilano.

By The Runner
[editorial]

On Friday, the voting period for the referendum on continued membership in the CFS and CFS-BC at Capilano University closed, and approximately 77.6 per cent of students voted to leave the organizations. The polling ran for five days, and had been preceded by two weeks of campaigning. Honestly, it was dirty. The Canadian Federation of Students had people campaigning for the “Yes CFS” side who had flown in from across the country. CFS materials shamed the CSU, but yet penalties seemed to come much more swiftly against the Dump the CFS team, who were urging students to vote no and leave the lobbying organizations. 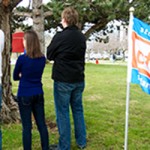 According to the Capilano Students’ Union, two minutes after the voting period ended they received a letter from the CFS alleging that they have not structured the payment of CFS and CFS-BC membership fees correctly. This was the first time they had been made aware of this, and they are one of the founding locals in the organization (which was founded in 1981). There are currently no details released about what exactly this means, but it does mean that because Capilano students have voted to leave the CFS, the CFS has insurance that will likely enable them to fight the termination of Capilano’s membership. And, if this case goes the same way as so many referenda before it, either the CFS will take the CSU and its students to court, or vice versa.

The student associations at the Universities of Victoria, Guelph, Saskatchewan, Ottawa, PEI, Simon Fraser, and McGill, Concordia, Cariboo College (now Thompson Rivers), Acadia and Kwantlen, twice, have all been in court with the CFS, since 1991. It’s a long list—just think about how many hundreds of thousands of dollars of student money has been spent in the judicial system as a result. Money from students, who are constantly racking up more debt that will take them ages to pay off once they finally graduate.

The CFS is a lobbying organization. They have some genuinely solid campaigns, and students need consistent advocacy done to push for lower tuition fees, and more grants, instead of student loans. However, the CFS is not the only organization out there advocating for these goals. It is worrisome that they (along with our students’ unions, who also need to advocate for us), are spending so much time and money in court when they could be dedicating that people power and funding to…lobbying.

If students want to leave an organization, they have a right to. They should never feel trapped. The backdoor rumours, court cases, and lies need to stop. We should applaud our fellow students when they accomplish something cool, like the new grants program being implemented in Newfoundland, and not take credit for campaigns that do not belong to us to boost the reputation of our chosen organization. Students should be able to come together regardless of whether or not they pay membership fees to the same organization, and fight for the right to have an affordable education.

Instead, what we have is a team of students from Capilano who worked tirelessly putting together a campaign for Dump the CFS. They believe so strongly in this cause that they dedicated three weeks of their time to informing their peers, trying to garner enough support to leave. The CFS fought for their cause too, but most of their campaigners were not from the school that was actually making the decision.

Kwantlen students are currently waiting to hear if their petition for a referendum on continued membership in CFS-BC will be accepted. If they are successful, a referendum will be coming to KPU as well, and you can bet it will follow a similar path as the one at Capilano.

Now the votes are counted, the future of Capilano’s membership with the CFS and CFS-BC is uncertain. According to the CSU, 314 students voted to remain members, and 1,091 students voted to leave. It is likely that if the decision of Capilano’s students is not upheld, their students’ union will fight for them, in or out of the courthouse—as they should. We genuinely hope it doesn’t come to that, because we’re tired of our student fees being wasted as a result of dirty campaigns or decisions of students being ignored.

It’s time to demand transparency, and stop the bullying. We as students need to come together and demand more of the money that is being taken from us every single semester—since at the end of the day, it’s hurting us the most.

3/29/14: Correction: The article has been updated to reflect that Douglas was not involved in a lawsuit with the CFS, although the results of their referendum were not recognized for some time. The Runner regrets the error.