Empty Alone, Better Together: An Interview with Mason McMorris of Comfort 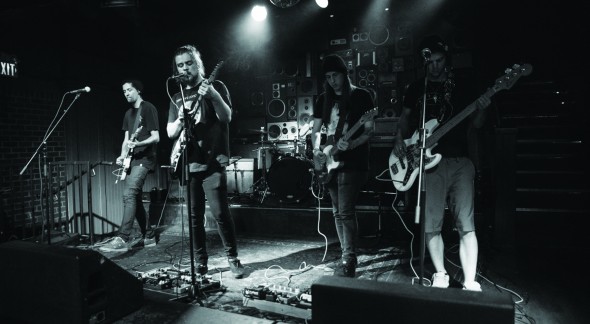 Mason McMorris lives for the little things. It’s part of what gives Comfort an ambient and immersive sound, along with their signature three-guitar setup. McMorris, Conner Elmes, and Alex Kappel each play electric guitar alongside bassist Tristyn Ginter and drummer Austin Smith-Greaves. By the time this lineup was finalized, McMorris had traded his car for a Fender Jazzmaster, and soon after the band released their first EP, February.

The debut features Ola Kado, who occasionally records harmonies and strings for the group. She lives in Montreal and is not available for live performances, but she’s a crucial part of the recorded sound. Kado can be heard on both February and the upcoming EP, Sanctuary, which were recorded in McMorris’s home.

“It’s nice to know that a band can get a decent sound out of their living room and not drop a couple thousand dollars or have it sound like a fuzzy demo,” he says. Choosing to record from home was an economic decision for Comfort, who consider themselves, “just five broke dudes playing music.”

McMorris’s hope for their first LP is to record it in a studio environment, but for now, they’re focusing on the publication of Sanctuary. The record—which was released on Nov. 21—is a step towards a more defined sound for the group. “There’s a lot more experimentation with sounds and time signatures on this one. We took a little bit of a math rock approach with it, whereas February was entirely post-rock.”

“I worked a lot harder on my vocals, too,” says McMorris. “I screamed in my other bands, but Comfort was the first time I ever really experienced singing in one. Doing that over the last year has really improved my abilities, which I tried to show on Sanctuary.”

As proved by “Vacancy”, a song released in preparation for the full EP, Comfort’s sound will remain recognizable. They will continue to use as many pedals and as much reverb as possible, and of course, they will maintain their three-guitar setup. Having three guitarists means that each one has to keep their playing fairly minimalistic. As McMorris explains, they “can’t really all be doing something crazy or it’ll sound like a big mess.”

“Like, in some songs, I’ll just play one chord and let it ring out while the other guys do something else. We try to turn it all into one big picture.”

This is where the obsession with “little things” comes in. Instead of centring a song  around a catchy riff or a series of power chords, Comfort combines several, smaller fragments to produce a fuller product.

McMorris first discovered the “big picture” approach when he got into shoegaze, post-rock, and emo. They’re the three genres that Comfort identifies with, and they can’t seem to pick just one. Their lack of an exclusive label could be attributed to the eclectic nature of the bandmates’ musical tastes, or perhaps because there are parts of every genre in their work. They have the fuzz and delay of shoegaze, the “spacey ambiguity” of post-rock, and the melodic tendencies of emo, with plenty of overlap in between.

“We’re kind of a sum of those three parts, but people could call us a reverb-washed indie rock band,” says McMorris. “Maybe a sad indie rock band. When we first made our Facebook page, our genre was just ‘sad.’ I think our description on our Twitter is ‘Five guys, reverb and cries.’”

Comfort is McMorris’s seventh band, “not including side projects,” but it’s also the first attempt at exhibiting his softer side. As it develops, it’s also becoming a channel for collaboration between the other members, but for now, McMorris writes it all. Conner, Alex, Tristyn, and Austin help give the music life both on and off stage by bringing the little things together, and as a group, the bandmates paint a bigger picture.