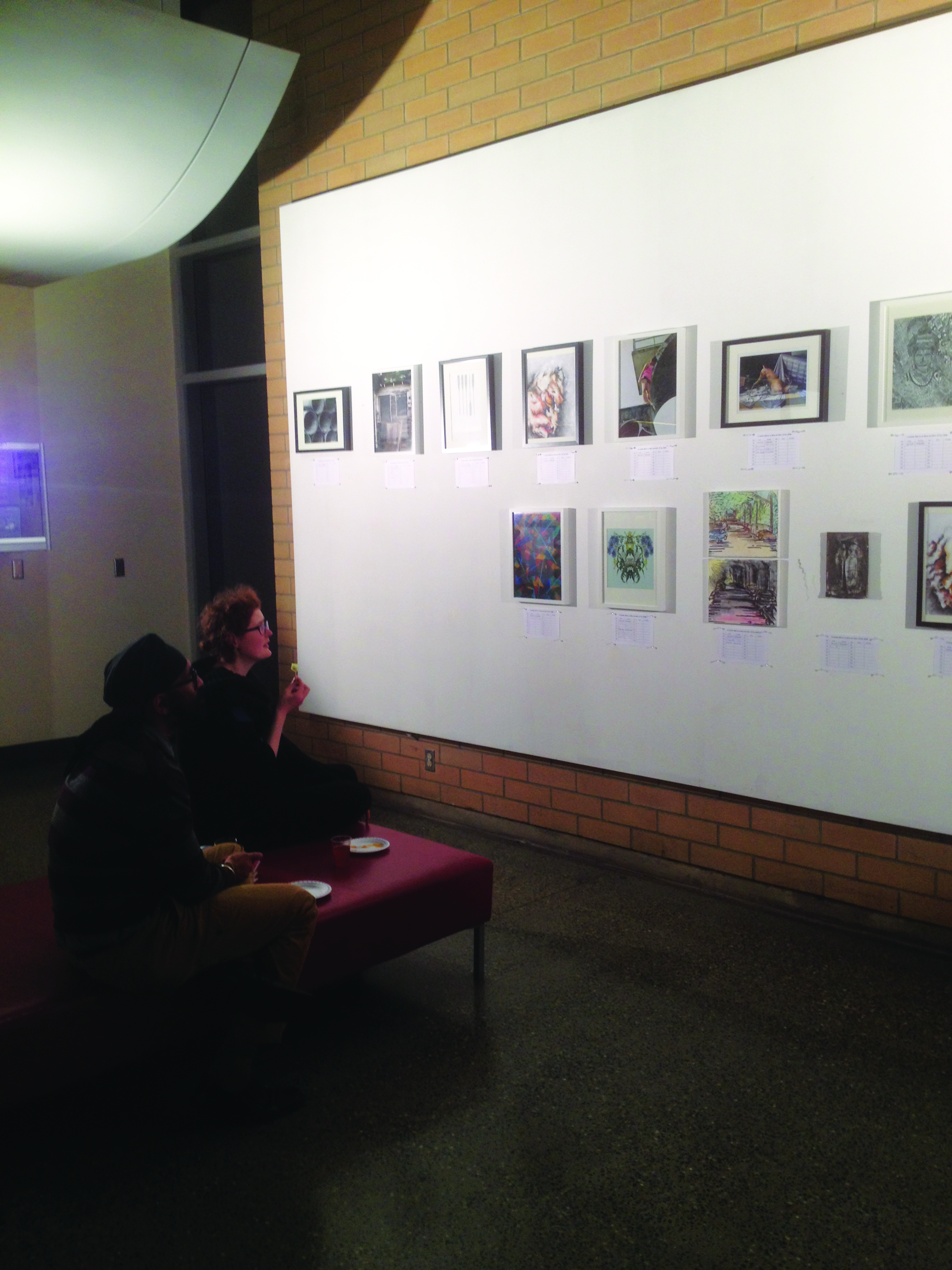 Last week provided an opportunity for local art enthusiasts to pay it forward at Kwantlen Polytechnic University’s Surrey campus. On Nov. 27,  KPU’s fine arts graduates hosted a silent auction, featuring works from students and faculty members alike. Reserved bids started at $50 and were increased by increments of $5, with the highest bidder receiving their artwork at the closing reception.

“It was very successful,” says Aksha Suri, one of five graduating students who contributed to the auction. “We had 26 pieces up and we sold 20 of them!”

All of the proceeds from the artwork will go towards the annual fine arts grad show, which is taking place on April 8. “We’ll have more solid details about the show’s time and location in January,” Suri promises. For now, the date is secured, and the show will be open to the public. All five of 2016’s graduating students—Olivia Richardson, Alison Law, Harpreet Mandher, Natalie Mussel, and Suri—will be showcasing their work there. Suri outlined what was sold at the auction as well as what attendees can expect to see at April’s grad show.

“Two of us have an Indian background, and we have cultural art based around that. One of us is basing her work on photography and she created her own light boxes, which is extremely expensive and difficult to do. It’s amazing to look at and it’s something that you’d expect from an actual art gallery, by artists who are more emerged into their art.”

“There’s [another] woman who’s dealing with issues of the body, the expansion of it and how she’s glorifying it from a unique perspective,” continues Suri. “Then another artist is into photography—she’s looking at microscopic detail and nature, and she’s not presenting it traditionally. She’s showing it as a film strip.”

The five graduating students contributed to the silent auction, as well as artists from second and third year. The artwork size was limited to 11 inches by 14 inches, so instead of originals some artists took photos of their work, if they typically paint on larger canvases. Art included drawings, sculpture, photography, images of paintings and prints.

The auction was entirely anonymous so bidders wouldn’t know whose work they were bidding on, or whether the artist was a student or a faculty member.This was done in order to avoid biased purchasing and make the auction fair for everyone involved.

“Bidders tend to gear towards certain people if they know them,” Suri explains. “It becomes less about the artwork and more about the people themselves. Maybe you’ll look at their work from a different perspective. That’s why it was important for us to keep everything anonymous.”

The auction was one of many fundraisers that the fine arts grads have hosted this year. It was the most profitable yet, potentially because, “It’s close to Christmas, and people are looking to buy presents.” In any case, Suri and her classmates are pleased with the results and hope they continue to wield similar ones in the future.

“It was a great turnout for us, and I think it’s good for people to explore more art and not to see it from face value,” says Suri. “It’s just another way for us to help people be more aware of art instead of just taking it as a pretty picture.”