The No Pants SkyTrain Ride

I see London, I see France… 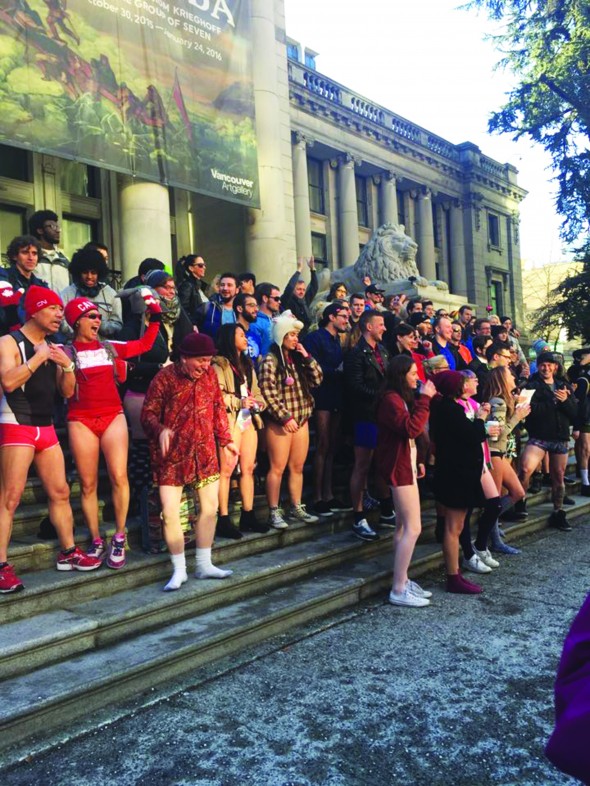 Imagine you’re riding the SkyTrain. Now imagine everyone around you is slowly removing their pants and standing nonchalantly in their underwear. If you were on the Canada or Millennium line on Jan. 9, this probably happened to you in real life.

The No Pants SkyTrain Ride draws inspiration from an event that began in New York 15 years ago, the No Pants Subway Ride. It’s just as absurd as it sounds. The folks at Improv Everywhere decided to begin hosting the so-called No Pants events as a simple means to “ mix it up” and create “a celebration of silliness.” And that’s exactly what it is.

Eight years later, Vancouver Improv Anywhere decided to join in on the fun. Co-creator and production manager of the organization, Larry Piché, has attended every No Pants SkyTrain Ride since they started, initially with less than 40 participants. Last year, he happily reports, they welcomed “well over 200.”

In fact, 2015 brought in such a huge crowd that they were forced by the transit police to leave. And it’s not just Vancouver. No Pants Transit Rides have now expanded to over 25 countries around the world—that’s over 60 total events, and a lot of pantless commuters.

The exact reason for No Pants Transit’s popularity is unclear, but according to Piché, it couldn’t be more obvious: people just want to have fun.

“The energy at a No Pants event is through the roof,” he says. “It’s a family-friendly event, so you’ll have people from age six to sixty gathered together to do something that is random and putting smiles on people’s faces,” says Piché. “This year, we are also selling commemorative T-shirts for $20.00 which helps fund our fun, free events. There’s also an after party immediately following the SkyTrain ride.”

Taking part in the event yourself, you’d find it’s hard to be against the whole thing. Granted, it’s ridiculous and there will probably be an unfortunate amount of skin showing every time it happens. But if what Piché says is right, there’s no real reason not to take part.

Only two requirements for participation are listed on Vancouver Improv Everywhere’s event page: attendees must be willing to take their pants off on the SkyTrain, and they must be able to keep a straight face about it. As a side note, they add, “Wear something appropriate. The mission is to make people laugh, not piss them off.”

When the pants finally do drop, it appears to be a bit of both. Some out-of-the-loop commuters look irritated. Others seem genuinely confused, but for the most part, they’re giggling. Smiling faces fill the train and surprisingly, there actually are entire families with pants slung over their shoulders.

By the time the No Pants group files out of the train—right on schedule—everyone seems generally satisfied and a little mortified. As a trio of young girls walks through Waterfront station in their undies, one of them exclaims, “We have to do this again next year!”