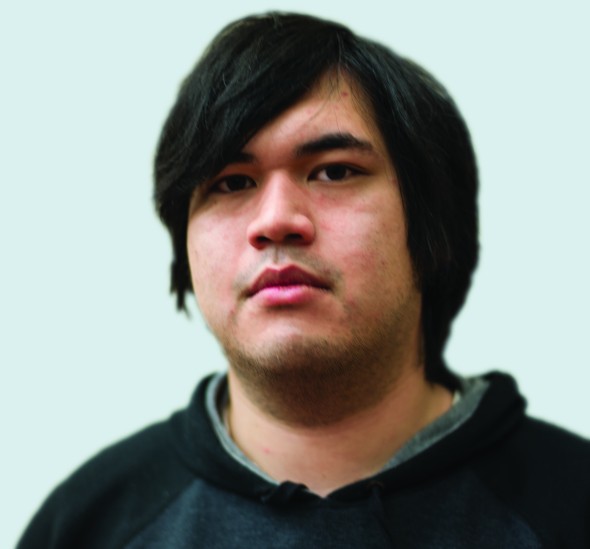 What have you accomplished in your first term as Science and Horticulture Rep that you’d want to keep working on in your second term?

Helping out with projects here and there, and attending meetings and committees.

Any issues that have caught your attention?

I want to help out with the Open-Education Resources campaign that [VP Student Services] Tanvir Singh is heading, as well as getting involved in the development of the new student union building.

What’s most important to science and horticulture students?

Open education would be part of it, especially since science, it’s constantly expanding. And the thing with science, it needs to be proved wrong once in awhile. So because of that, we’re going to have to go through a whole bunch of different editions of textbooks. Open education resources speak a lot to that because textbooks can be changed on the fly.

Last year, after you won, you said you felt no obligation to speak to The Runner, what are your thoughts now?

It was my first time doing something like this, so I didn’t know what media relations were like. I’m more open about it.

I suggest more people read over our committee minutes, and our meeting minutes, if they want to know what’s going on through those.

Sommer was unable to be reached for an interview. What follows is her candidate statement.

My Name is Sommer Abdul-majid, I am a fourth year student majoring in Sociology. Currently I am a student member on both the University Affairs and Student Life committees, I hope to continue to represent Arts students as a KSA representative by getting your vote as Arts Representative. As a Sociology major I understand how the Arts department can often be overlooked but, I feel that I can help make Arts Students voices within all departments heard and represented. If elected I will do my best to represent Arts Students at KPU. Go Arts!! 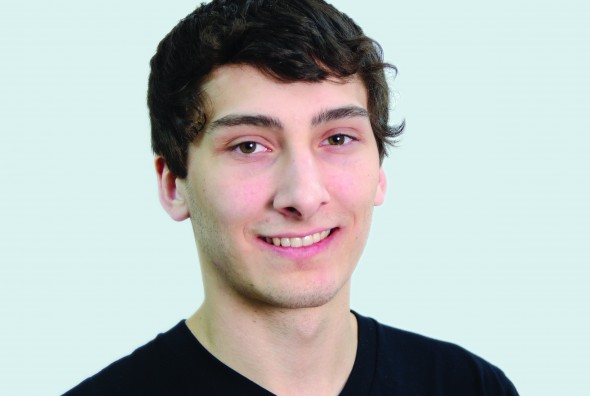 What would you plan to accomplish with the position of Arts Rep?

What do you believe your potential constituents at KPU want from their representatives? How do you plan to deliver?

I think that a lot of people want to have opportunities to engage with the school and the faculty. Campus life at Kwantlen is a little bit different than you would see at other universities, especially with clubs and committees and stuff, so I think a lot of people would jump at the opportunity to be more engaged with extra curricular activities if given the option.

What aspects of the KSA do you believe could be improved?

It’s hard to say. I think I would need to be more involved through Council to learn more about what’s going on at those meetings, to kind of see from the inside what could be improved.

Do you have ambitions of running for executive?

Potentially in the future.

What experience do you bring to the role that you feel is relevant?

Running a club for about a year now has been a lot of experience. Also I’ve been sitting on the sustainability committee, as well as being engaged with other KSA events. I think I’ve gained experience from those events, as well as volunteering through the YMCA and the Rotary Interact leadership clubs. I’ve made conferences in the past for youth, so I think I have a lot to bring to the table. 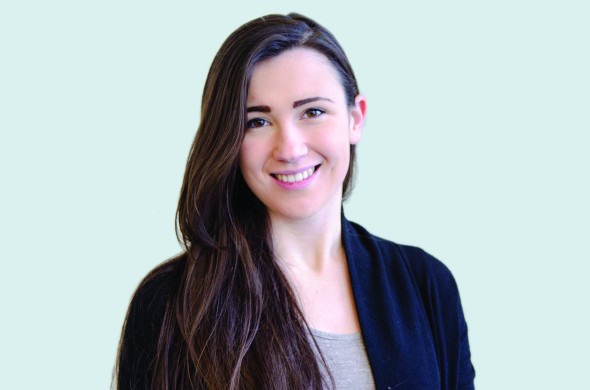 You were elected last fall in the midterm election. What have you been able to accomplish in your time since then?

I feel a lot more comfortable in the KSA now. A big portion of what I was doing was to understand Robert’s Rules and how Council works. I was also involved with Welcome Week and am currently on two committees, the sub-committee for the provincial election and the consent committee, trying to promote consent at university to lower the level of sexual assault. I feel both of those committees are growing stronger, we just had our first self-defence class as part of the consent campaign, so I feel it’s going really well.

Have you been working close with the executive team in your efforts?

Yes. I’ve been working close with Alex [McGowan, KSA President] for the provincial election, and Natasha [Lopes Lopes, VP Student Life] with the consent campaign. I’m also a part of the Student Life committee, and Natasha’s a big part of that.

Do you have ambitions for the exec team?

So you’re in for the long-haul?

I believe so. I quite enjoy being here and if I can continue to get re-elected I am hoping to stay.

What do you believe your constituents—arts students—want from a representative?

I believe they want to be heard, and they want to know that someone’s caring about them on council. The KSA does so many different and wonderful things throughout the whole school that they need to have a taste of everyone in there. We’re thinking of putting pianos around campus for the arts students, or for any students that might want to play. There’s also the open resources that are trying to limit the number of textbooks we have to buy.

[Art students] need a voice, and I’m willing to listen and try to empower their wants and needs in the KSA.

Are there any problems with the KSA that you would want to address in your term as councilor?

I like how the KSA runs. I really enjoy being part of it. I find it runs smooth with the Council meetings, and even if we have a disagreement in Council we deal with the disagreements. There’s nothing I really want to change. I want to add to it. 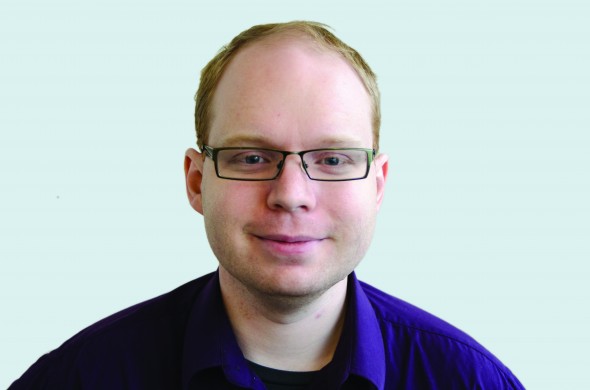 Last year you ran for and achieved a seat on council as Richmond representative. Why the move to Arts Rep for this term?

What do you believe your new constituency will be looking for from their student representative?

Somebody to do stuff. As far as doing stuff for the KSA, the bar is really low. Don’t get me wrong, it’s not bad—it’s great that there’s not a huge expectation to achieve a SkyTrain line all the way down to Surrey or stuff like that. Nobody expects that, so it takes off the pressure for a lot of people. [Becoming a councilor] is a daunting task, there’s so much for you to do and quite literally it’s like “go ahead, do it.” There’s no tutorial, it’s basically a giant learning experience. So I think [students are looking for] someone to stand up and start doing some work.

Are there any particular initiatives in mind that you want to undertake?

I did a lot of the bylaw work for the upcoming AGM, I did a lot of regulations. I wrote the one to allow people to run for the KSA without their legal names. It was an issue that was stopping trans members of the community from running because they would rather not be outed by running for politics. It’s stuff like that that I’d like to work on, and others like increasing awareness of Fentanyl—we’ve had way too many overdoses.

You’ve served as a KSA councilor for a year now. Are there any aspects of the student government that you’d like to improve upon in your next year?

Honestly, everybody works really hard. There are some council members that do an enormous amount of work. But I find there are a lot of issues, and not always with the KSA side of things, but with the KPU side.

For example, the D.A.M.N. group (Disability Action Movement Now) requested to have the hedge trimmed on the Richmond campus so that people on wheelchairs could get by there without being hit by the twigs. And it took a couple of months to happen, which is way too long. There’s a lot of delays like that. Especially when it comes to anything with construction. I’m going to be trying to make it so that we can put in these requests in advance to foresee the problems, so when there is a problem, it’s already being taken care of.

Do you have plans on running for the executive team?

No I do not. Unfortunately I found out I’ve been diagnosed with colitis, and it’s made it so it’s very hard for me to attend the meetings. As much as I think I might be great—I’d normally go for Student Services—I think Tanvir’s doing a way better job than I could do, so it would be very, very big shoes to fill. But I’d rather [the position be held] by someone who wasn’t worried about not being able to do a meeting. 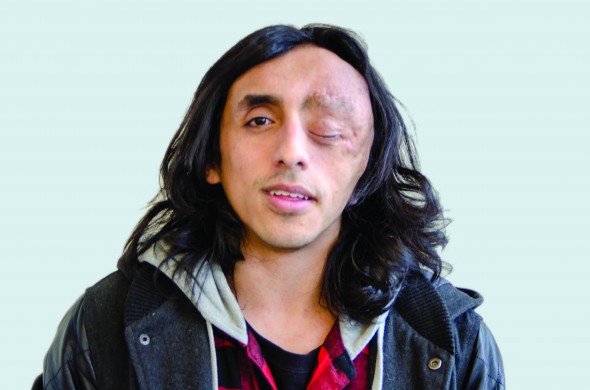 This is your first time running for the KSA. What experience do you think you could bring to the position of Arts Rep?

I’ve been part of the External Affairs committee for about two years now. I’ve helped out with a lot of campaigns, like the “Get Out The Vote” and the referendum for transit. I’ve also been taking a small part during the provincial campaign they’re running right now, and I’ll be a part of that, win or lose.

Do you have any ambitions of running for the exec team?

Yes and no. It’s something I’ll see if I can do, and if not I’ll try to help out as much as I can. Maybe in a year from now, I’ll try External.

What do you believe your potential constituents would be looking for in a representative?

I think someone who’s honest and transparent and will hear the issues they have. Someone who can help them.

How would you go about doing that?

Something that I want to do is ask around, see what they need help in, what problems they have. Then I’ll bring it to council and say “These are the issues, what can we do about it?” And then we’ll figure it out.

Are there any other councilors in particular who you feel you can work closely with?

I know a lot of the people running. I’ve talked to Murdoch [de Mooy], Jonathan [Bucyk], and a few others. I feel like they’re reasonable people that I can talk to and we can discuss what we can do.

Are there any aspects of the KSA that you’d want to change or to improve upon when you become a councilor?

One thing is that I don’t feel like they have good communication with the students. Sometimes students don’t know when there’s an election, when they can run. The only way I found out about the election is that I saw a poster. And I thought I had to run, as it was something I always wanted to do.

What are some of you goals or aspirations in joining the KSA?

Something I’d like to see is a nap room at KPU. Sometimes we’re tired, sometimes I’ve had to sleep in the third floor of the library. One time I almost missed my exam because I fell asleep.

Also, as I’ve said, I’d like to promote the KSA more, let people know that they can join. It’s easy to join. They just have to know where to go.