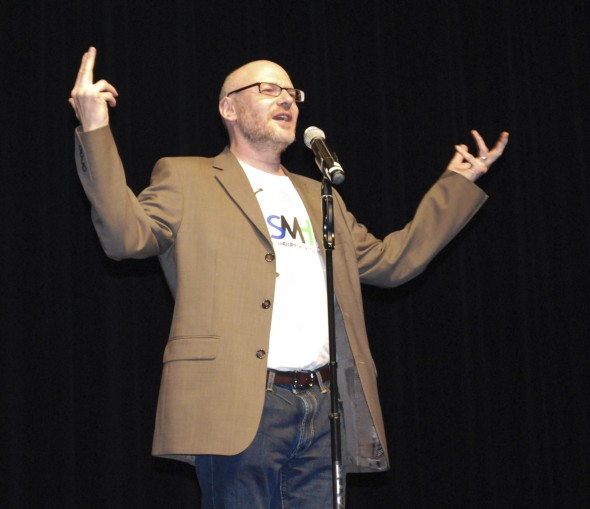 David Granirer came to KPU to give a presentation on comedy and mental health on April 5. Granirer is a comedian, counselor, author, and the founder of Stand Up For Mental Health, a program that teaches stand-up comedy to people with mental illnesses.

Granirer’s presentation was a mixture of live comedy, videos featuring comics that he has coached, and important information both about his program and the positive effect comedy has on mental health.

“The ability to shift your own mood by using humour and by making people laugh is a wonderful coping mechanism,” says Granirer.

Granirer founded Stand Up For Mental Health in 2004. He has trained comics in over thirty-five cities in Canada, The U.S., and Australia. He and his comics have performed over five hundred shows to date.

“Start with one or two people that are close to you, and once you’ve done that, hopefully it will give you more confidence to talk to other people.”

Granirer also says that he realizes that, due to the stigma still surrounding mental health in our society, it is not always safe to talk to those around you about your mental illness.

“I remember at one point one of our comics said, ‘I have to quit this program because I’ve just gotten a job and I really need to work and it’s got great benefits, and I don’t want them to know that I have a mental health condition. I’m afraid that if I do shows with you guys, we’re so public about it I’m afraid that they’ll fire me.’”

“In an ideal world, I would have said, ‘Don’t worry about it, just be yourself, let everyone know.’ But it’s not an ideal world, so I said, ‘I totally understand, your job comes first,’” says Granirer.

“April 7 is actually world health day, and the topic of the year is depression,” says Kat Roussakis, fitness and wellness coordinator for KPU Sport and Rec. “Seeing as it’s a university, and depression is prevalent amongst university students, we figured this would be a good opportunity to bring light to the topic, and to showcase the programs that we offer to students who are suffering, maybe in silence.”

Bransford also reminds students of the various clubs that KPU has to offer to help students stay involved with their university.

“That’s why we do things like this, just trying to get the word out and keep awareness up,” he says.