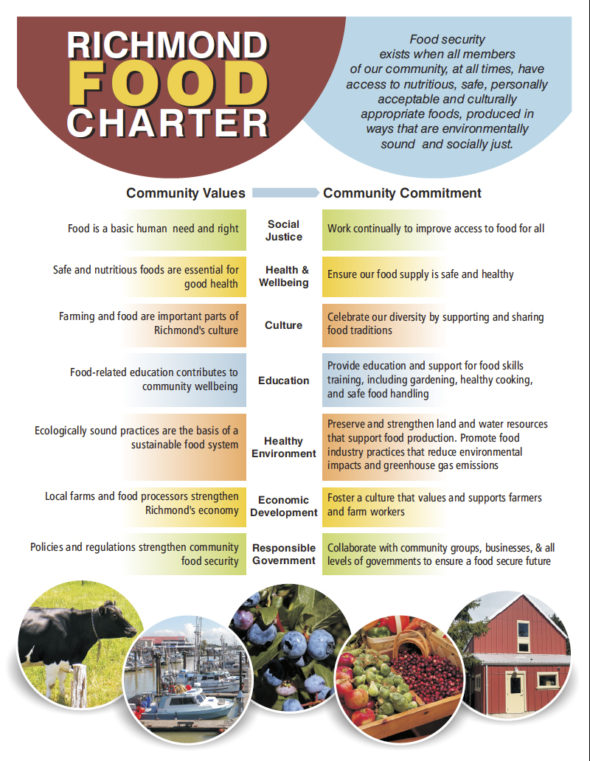 The Kwantlen Student Association endorsed the Richmond Food Security Society’s Food Charter, which is a set of policies set to promote healthy and local food production, at a meeting of Council on June 9.

The charter addresses food systems from production to processing, consumption, and waste and develops policies to support local communities and farmers.

“We had reached out to the [RFSS] a couple of times and really just made a connection this year,” says Mairi Lester, sustainability coordinator for the KSA. “We did the Just Eat It film screening as part of ecoDays Richmond and Anita Georgy, the executive director at [RFSS], came and spoke as one of our speakers.”

“It’s nice for [the sustainable agriculture students], I think, to know that we have their back in that context. We think local food is important, so what [they’re] doing is an important part of how we see our communities developing,” says Lester. “We want to help create this local food system. We want to make sure that people have access to healthy, nutritional food in their neighbourhood and that they know where it’s coming from.”

The KSA already prioritizes a number of food-related initiatives including an emergency food bank for students across all four campuses, cafe operations—which include selling food and disposing of food waste—running farmers markets, having community gardens, and hosting events that give away free food. According to Lester, “all of those things are affiliated with this idea of food security and food locality.”

The endorsement won’t likely be as noticeable on KPU’s other three campuses as it will be at Richmond, but the move towards aligning with the charter’s policies would occur on all of them.

“Right now we don’t have a food policy at the KSA,” says Lester. “We’re working on a purchasing policy, but it’s quite an involved process to develop because you have to consider so many things.”

Not currently having a food policy doesn’t mean there’s no thought or care put into the food systems in place at KPU. The KSA does much in the way of promoting healthy food systems, such as offering compost bins and purchasing Fair Trade coffee and teas for the Grassroots cafe.

The KSA is interested in developing a food policy that will align with the charter’s policy next year. Future projects that will also adhere to the values of the charter, but aren’t necessarily a result of the endorsement, include the KSA working to create “market bucks” for students to use for discounts at the market. The finer details on that are still being worked out.

According to Lester, a logical next step would be to get the university on board with the charter as well.

“I think that realistically there will probably be a request from our council to have the University endorse the charter, or the departments.”