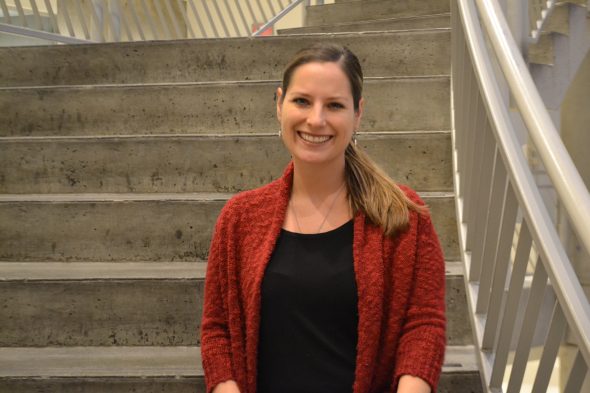 Alana Abramson has come a long way since her turbulent youth. Now, she teaches criminology as a KPU professor. (Alyssa Laube)

At the age of 14, Kwantlen Polytechnic University criminology professor Alana Abramson began sleeping on the streets of Vancouver.

She spent the year leading up to her 15th birthday using and selling drugs under the influence of an older man who had vowed to care for her after she was disowned by her parents. She was arrested for trafficking without a conviction before she turned 16.

The life-changing trauma that Abramson experienced set her on the path to working in restorative justice, a path she continues to follow today through her teaching at KPU.

While still living on Granville Street, she was arrested by a police officer who treated her with dignity and respect, and the judge presiding over her case allowed her a second chance to stay out of the system by keeping her criminal record clean. When Abramson was 16, her foster mother inspired her to recreate herself and go back to school, which she did, using her positive experience with the criminal justice workers she encountered to choose her major. The next year, she moved back in with her parents, and over the next two decades she got her doctorate in Criminology at Simon Fraser University.

The first students Abramson ever taught were from Kwantlen Polytechnic University, after she was accepted as a sessional instructor at university in 2005

As an instructor, Abramson initially kept her struggle with drugs and homelessness to herself out of feelings of unresolved shame. Only this semester did she start telling her classes about her past in hopes of deepening their understanding of criminology and the importance of getting to know the men and women who spend years of their lives behind bars.

“I remember the very first time I taught Introduction to Criminology, I brought someone doing a life sentence with me, and he talked about his 15 years in prison,” says Abramson. “From then on I really carved out my own path of being somebody that was trying to bring the community and real life stories into the classroom.”

One product of her drive to connect prisoners and students at KPU is the Alternatives to Violence Project Workshop series. Every third Wednesday of the month, Abramson facilitates an event where people on parole visit KPU students on the Surrey campus to share experiences, explore how to live a nonviolent life, and work together to break down stereotypes about what it means to be a prisoner.

According to Abramson, some of the visitors who speak at the workshops are now waved to in the hallways, warmly addressed by name, and generally respected by the students who have met them through the workshops. She believes that having that community available outside of jail can be key to helping people reintegrate once they are released from prison, instead of falling back into a life of crime.

“They need places to go where they’re not going to be judged, where they’re not going to be labelled and stigmatized. These men and women feel safe here, and I think universities should be open to the public this way,” says Abramson. “And of course, my students get a way different understanding of criminology when they sit in these circles, so it serves both students and prisoners to pursue more social justice.”

The last seven days of November are Restorative Justice Week. To celebrate, Abramson organized a symposium with a surprising theme: uniting a man who committed murder and the daughter of his victim through public conversation.

Glenn Flett, who shot an innocent man named Theodore Van Sluytman while robbing a bank in 1982, has met with one of his victim’s daughters, Margot Van Sluytman, several times to talk about healing and restoration. Now, Abramson says that the two consider themselves friends.

“It’s really amazing to see this man and woman together, and this woman’s father is not alive anymore because of this man, and they embrace,” she says. “They’re going to tell their story about how they got to that place.”

But Abramson’s relationship with Flett has far more history to it than a simple fascination with his case and life after release. When she was in her third year at Simon Fraser University, one of her professors brought Flett in to talk about the murder and consequent rehabilitation. That moment 18 years ago made Abramson commit herself to following his life story, and those of others like him. Now she hopes that he was able to do the same for at least one of her students or an attendee at the symposium.

The professor who invited Flett into her class in 1999 was the late Dr. Liz Elliot, who was a personal mentor and inspiration to Abramson. This year, she won the Restorative Justice Liz Elliot Memorial Award, bringing her work and story into the public eye more than ever before.

“I really think that hit home, that I am now somebody else’s mentor. To be honest, I’m still processing what that means,” says Abramson. “It is a responsibility to be looked up to, and to have this honour not only as an educator but now somebody that’s a leader in the field. I do think about what that means and I want to take it seriously and be reflective about what it means, but I’ve just done what feels right and tried to emulate what my mentors did.”

The experience of having her life put on display through the awards show and the media interest that followed has left Abramson overwhelmed, but still thriving. Through this and through revisiting the hardships she has faced in therapy, she has been able to reflect deeply on what it meant to her to lose a large part of her childhood to homelessness and crime.

“I’ve been the victim of harm, but I’ve also been the perpetrator of harm,” she says. “I lived for a long time with a lot of guilt. All of the drugs that I sold—where did they go? Did they kill people? Did they break up relationships, break up families?”

She continues, “It’s really testing how much I’ve healed from that. For me, it feels okay. There’s still a part of me that wonders how it feels for my family because they’re implicated. They are talked about in my story … But for myself, I’ve integrated that part of myself and I don’t feel ashamed of it anymore.”

To get involved with the Alternatives to Violence Project workshops or connect with Alana Abramson, contact her at alana.abramson@kpu.ca.