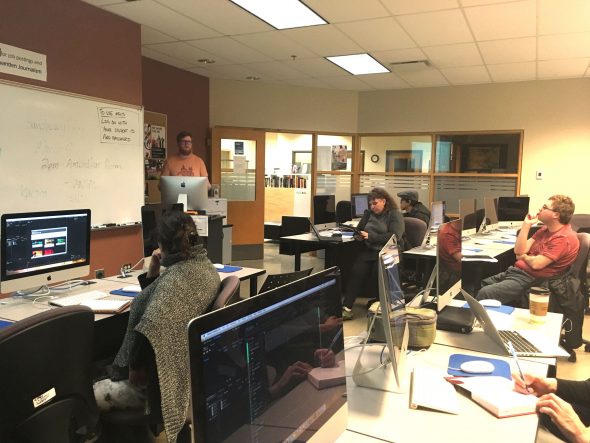 Peter McCartney speaks to students and members of the Kwantlen Public Interest Research Group about the effects podcasting has had on social justice movements. (KPIRG)

The Kwantlen Public Interest Research Group hosted a seminar based on the work and podcasting expertise of Peter McCartney, a climate campaigner for Wilderness Committee On Feb. 22.

Wilderness Committee is a charity and “wilderness protection group” that boasts more than 60,000 volunteers nationwide, according to its website.

One of Peter McCartney’s projects with the organization is a podcast called Line in the Sand, which highlights the Kinder Morgan pipeline crisis. McCartney says that he hopes to make real change with his work on the podcast, and makes an effort to be more hands-on within the community that opposes the construction of the pipeline.

One such instance of being hands-on involved McCartney and his colleagues cooking food with other individuals that were supporting the movement to supply hungry protesters with necessities while they were advocating.

After discussing how he created that project, and outlining some podcasting essentials, McCartney explained how social justice issues are being advocated for through the medium of podcasting. According to him, bringing awareness to a variety of issues on public platforms like Soundcloud and Youtube through podcasting has made the medium highly diverse as a whole.

From offering helpful editing tips to outlining the protocol of interviewing another person, Peter McCartney gave all who attended the workshop insight into what the aspects of a great podcast are.

Later in the session, he also touched on how audio strips away bias in media. Audio, of course, can be edited to distort the facts, but McCartney emphasized that the truth is always going to be more digestible for listeners when they hear it directly from the source.

Podcasting tells a story in a way that is accessible to today’s younger generations, and many KPU students are a part of that demographic. With journalism continuing to evolve with the times, it’s important for KPU students to be able to attend sessions like this to learn how to use their voice to incite change.

PJ Lilley, the Research Coordinator for KPIRG, was enthusiastic about the event because she has “high hopes for starting KPU’s very own radio station.”

According to Lilley, this station would consist of multiple contributed podcasts from students and teachers discussing subjects pertaining to all things KPU. They are currently looking for volunteers for such projects as well as new members for their board of directors.