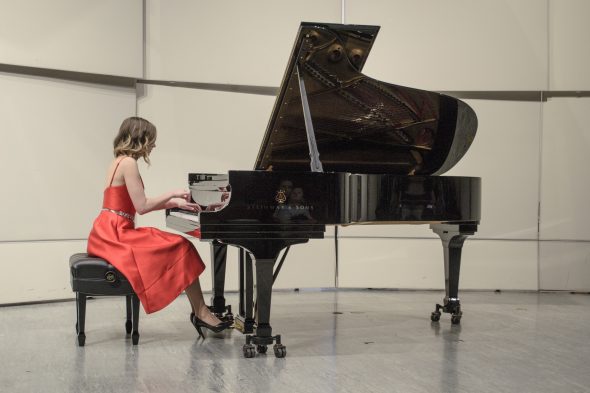 The school’s music program was established in 1993 on the same day that the Langley campus opened for business, back when it was still Kwantlen College. In celebration of the milestone, the department held a gala and performance in the Langley campus auditorium attended by faculty, current students, and some of the department’s most accomplished alumni.

The chair of the music department, Jane Hayes, has been a part of the community for every one of its 25 years.

“I can honestly say that, as a student body, these music students can just blow your mind with what they’re doing, not just in a narrow field of being a performer, but how they’ve used these talents and branched out into so many different areas,” says Hayes.

The evening began with appetizers and drinks as members of the music program played jazz in the Langley campus atrium. Later that night, there were performances from the Kwantlen Chorus and the Kwantlen Wind Symphony, as well as from KPU music students and alumni. The department also took the opportunity to honor its 25 most distinguished alumni.

“It’s so encouraging [to see KPU alumni succeed], especially when you take a look at other music schools in B.C. They’re so big that you don’t tend to assume that Kwantlen has that same caliber,” says KPU Music Students Association President Emma Dotto. “It’s really neat to see what [the department] has accomplished.”

As KPU has grown, so too has its music programs. Hayes recalls that the Wind Symphony was formed in 1997 with just 20 people and has grown greatly since. Similarly, the Kwantlen Chorus, which began with just nine members, today consists of over 60 people.

Hayes also says that, in the early years of the department, students typically gravitated to the one-year certificate program, seeing the institution as a way to dip their toes into music education. Later, after Kwantlen College became a university college, students largely enrolled in the two-year program before continuing their studies at other institutions. Today, Hayes is proud to report that more music students than ever are staying to complete their undergraduate degrees at KPU.

“[The music program has] grown and developed the way that Kwantlen has,” says Hayes. “When I came here, Kwantlen was a college. Two years later, it was a university college, and now it’s polytechnic university, so the program itself actually really kind of went along with each change.”

Part of the appeal of KPU’s music department, according to Hayes and Dotto, is the community that has developed within it over its 25 years. Hayes says that she’s still in contact with students who were in the first program that the department offered back in ’93.

Dotto says that she appreciates the relatively small size of the program.

“[The community] is so strong. We know our profs so well and our profs know us so well, so that creates a really good learning environment,” says Dotto. “I know some schools that—because there are so many music students—voice majors and instrumentalists don’t get to talk to each other as much, but at Kwantlen it’s just everyone knows everyone.”

During a break in the musical portion of the evening, the microphone was passed around the audience and the KPU music alumni were given the opportunity to share their favorite moments from their time in the program. The stories they told spoke to the collaborative power formed by 25 years of friendship, community, and music.