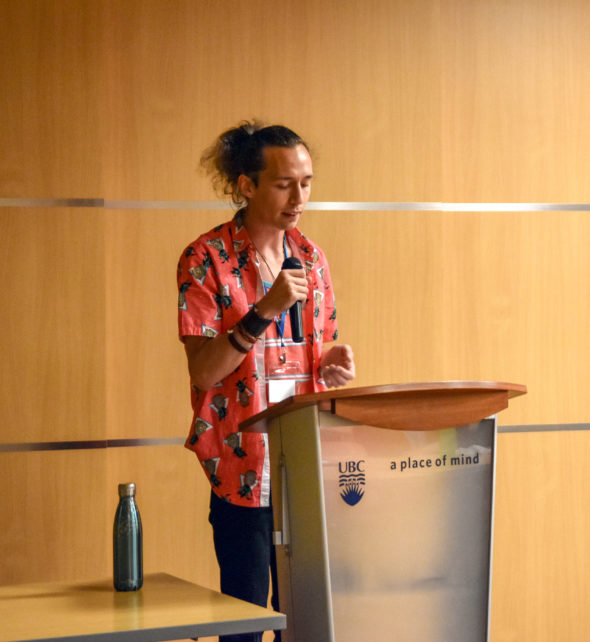 Creative nonfiction is an umbrella term used to describe several new ways of narrative truth-telling. It isn’t composed in any one style, but combines elements of both journalism and creative writing to create some altogether new.

To celebrate and explore new work being produced in the field of creative nonfiction, Canada’s Creative Nonfiction Collective Society (CNFC) hosted its 15th annual conference, “Writing True”, at UBC from June 14 to 16.

The first day of events included a variety of master classes in the morning, followed by the conference’s first ever student reading. The reading included two students from UBC, an MFA student from Halifax, and three KPU students—Tawahum Bige, Lena Belova, and Chelsea Franz.

Cathy Stonehouse, a KPU creative writing instructor and member of CNFC who curated the reading, says that creative nonfiction is rising in popularity because readers have always had a hunger for the truth.

“The beauty of this form is that its re-claiming truth-telling,” she says. “These forms have always existed, they’re only now being collected and published in a more formal way.”

As an experienced writer and performer, Tawahum Bige says that reading nonfiction is a different experience than most other forms of creative expression.

“Creative nonfiction feels like opening up” says Bige, who read their nonfiction work for the first time at the event. They note that—unlike slam poetry, which requires punchy lines and quick performance—nonfiction allows writers to slow down and share longer, more intimate stories.

Stonehouse adds that some of her favourite pieces of writing by students have been produced in nonfiction classes.