“See you later, space cowboy” is the theme of the duo’s breakout record 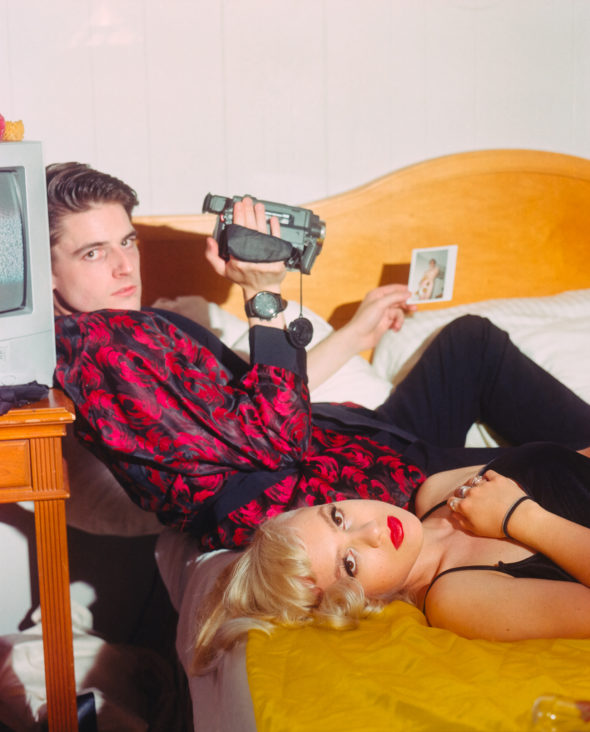 The concept for the album came about when half of mellowhaunt, Matthew DeBeer (keys, production, lyrics), found himself stranded in New York with a broken heart, a slim wallet, and two weeks of empty time to fill. Feeling lost but inspired by the local music in the city that never sleeps, he wrote the first track on what would become the band’s debut: “Love is a Three-Headed Dog.”

With that period in his life now drawing to a close, “Love is a Three-Headed Dog” is streamable online as a teaser for what’s to come on mellowhaunt’s breakout LP. Mixed by Owen Reimer, it’s bound to be dissonant, moody, and lush, fully immersed in the bittersweetness of West Coast indie. There is a certain lightness to mellowhaunt — perhaps because of singer and guitarist Derya Gwynneth’s soaring, layered vocals — but it doesn’t come without the heaping spoonful of melancholy that sets the stage for the record’s inciting incident.

What DeBeer wrote once he got home from New York was haunting and stylistically experimental. Still, each song was united by the same general theme of isolation — not necessarily loneliness, but the simple act of being alone.

Hence the images of deserts, lone rangers, outer space, highways, and other motifs that bring to mind long nights of solitude. There are even alien noises inserted throughout the record.

“When I came back from New York, it was probably the loneliest part of my life,” says DeBeer. “I had never been heartbroken like that before so I wanted to see what I could make of it.”

Throughout its nine-or-so tracks, listeners can expect to be brought through “the different stages of heartbreak,” as each of them were written at different points in his separation from his ex.

Gwynneth sings mellowhaunt’s songs, but DeBeer writes the lyrics. As such, she notes that many of them might be misinterpreted as being reflective of her experience rather than his.

“A lot of people assume it’s just another straight love song, but it’s not. It’s about Matthew and his boy,” she says. “If people would stop gendering their voices that would be really great, but obviously we know how it’s going to come across.”

The two of them joke about naming the record We Are Not Together (they never have been, still aren’t, and would appreciate it if people would stop assuming that they are) but what they are in together, is music. Their creative partnership goes back to when DeBeer first started producing tracks with Gwynneth, planting the seeds for what would later become mellowhaunt.

“When we worked together it was so smooth,” says DeBeer. “We both had the same sad vibe, but it works too because she pushed me to be a little more groovy sad.”

Gwynneth adds, “This project was more of an experiment to see what we could create because there are so many different sounds in the album we’re working on right now. We weren’t curating our music around trying to be unique but we were definitely aware that it’s not what people are hearing.”

She elaborates that the record will be “ambient, industrial, and dance-y” with a “dreamy sort of vibe” from start to finish.

Their next show will take place at The Roxy on Jan. 29 in celebration of the release of their upcoming single, “Safe to Sleep.”