Government and Grassroot Initiatives Support the DTES During COVID-19 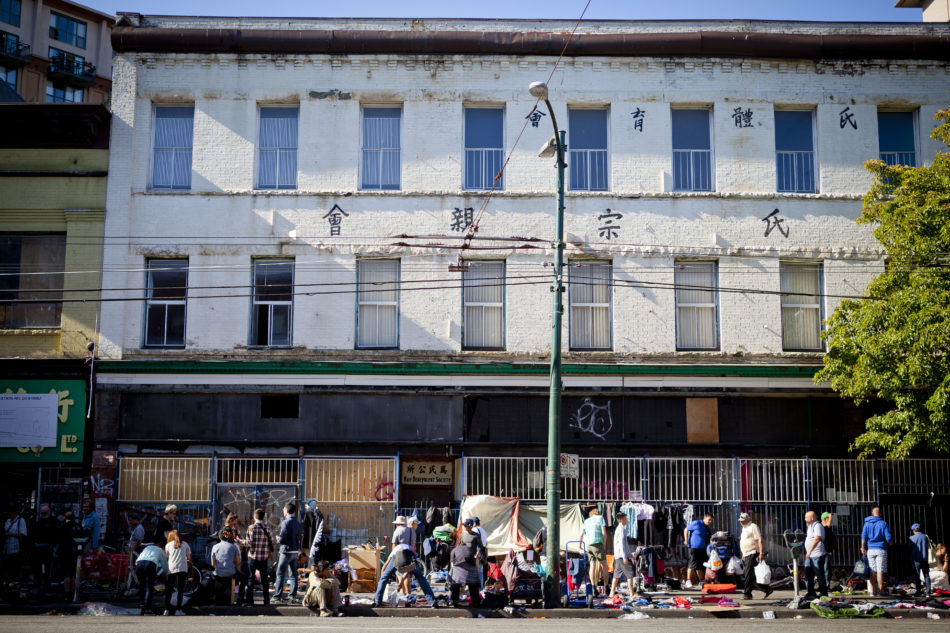 Vulnerable communities across Vancouver’s Downtown Eastside are in need of special support as social distancing becomes paramount, global markets shudder to a halt, and the opioid overdose crisis continues to take lives. In recognition of the community’s unique place as a hotspot for two simultaneous crises, representatives from the City of Vancouver, Vancouver Coastal Health, and Atira Women’s Resource Center gathered for a press conference in late March to discuss additional measures which could support the community.

They started by announcing the deployment of two new 24/7 referral-only response centres at Roundhouse and Coal Harbour that will help create additional capacity and provide a safer place for those experiencing homelessness. If the need arises, the City is prepared to set up five or six more.

“People who are homeless or sheltered people who need to leave their current shelter due to lack of space will be eligible to go into these new sites,” says Patty Daly, Vancouver Coastal Health Chief Medical Health Officer.

“There may be people who are positive for COVID-19 or suspected to have COVID-19 within these sites, and there will be guidance on how to safely, for example, cohort those residents so that they post less of a risk to others within that shelter space.”

For people in the Downtown Eastside who are already housed, the City has increased tenant cleaning protocols at publicly managed single resident occupancy housing. Staff are also working with Vancouver Coastal Health to ensure that privately managed SROs are clean and ready to be used for self-isolation.

Eleven municipally-funded handwashing stations and seven portable washroom facilities have been established in the neighbourhood, and if someone from the community needs to be quarantined but doesn’t have a safe place to go, they can access one of hundreds of hotel rooms retained by the City.

The neighborhood is also deeply affected by changes in the illicit drug market, which is in flux due to the COVID-19 pandemic and the closure of the Canada-U.S. border. Due to shortages in the drug supply, people may start selling drugs mixed with other poisonous substances or buying poorer quality drugs as their usual supply becomes more expensive.

In response, the province announced guidelines for safe supply across B.C. which eliminate barriers to getting prescription alternatives to the poisoned drug supply.

One of the people who helped write the policy is Garth Mullins, the writer, host, and executive producer of Crackdown, a monthly podcast about drugs, drug policy, and the drug war led by drug user activists. He is also a member of the Vancouver Area Network of Drug Users.

“Some [places] are closing, and there are staff shortages, certainly PPE shortages, so that affects how many people can get access to a safe injection site or harm reduction supplies,” he says. “That makes things more risky for people, and altogether this means that overdoses, in Vancouver anyway, are back up.”

He also urges people who don’t have a good reason to be in the Downtown Eastside to stay away from it if possible.

“I know it might feel like the right thing to get a bunch of soup, bring it down there, and hand it out, but really think about how this would work. The advice for everybody is to try and slow the transmission of the virus down through social distancing or physical distancing and self-isolating, and that’s really important to do but it’s harder and harder in some drug using communities,” he says.

The municipal government has also created the Food Security and Access team, which is a part of the City’s new COVID-19 Community Resilience service. The team is working on creating a number of scalable programs that will improve access to healthy and regular meals on a daily basis,” as written in a press release from the City of Vancouver Communications Office.

“These programs will focus on residents who are marginalized and/or made more vulnerable through the crisis, including those who are in self-isolation, ill or can’t have their needs met because services are diminishing,” it reads.

Through Give a Hand Vancouver, the Giustra Foundation has donated two weeks worth of food for people in SROs in the Downtown Eastside. The City has received other contributions as well, but asks that the public donate to the organizations listed on Limage Media’s Public Vancouver Emergency Food Services & Community Supports Map, which is updated daily.

Park Board and City staff are coordinating production and delivery of hundreds of daily meals and hampers of food for seniors and tenants most vulnerable to COVID-19, including those in self-isolation, across 11 city-operated SROs and non-market housing sites, according to the media release. Meals are being prepared at kitchens in Langara, Fraserview Golf Course club houses, Carnegie Community Centre, and the Gathering Place. Vancouver Community College and Potluck are also freeing up their kitchens for meal preparation.

The Vancouver Food Bank is now operating out of Queen Elizabeth Theatre and the Mount Pleasant Community Centre from 10:00 am to 2:00 pm.

Many of these initiatives are carried out by the DTES Task Force, but there are countless people providing support on a grassroots and not-for-profit level too.

Kathy Shimizu is a Downtown Eastside Response Coordinator with the DTES Response Fund. During the early stages of the pandemic, her organization launched a fundraising campaign for four community organizations distributing resources in the community and made $100,000. They hope to help people who need immediate assistance or are ineligible for government support.

“What the fund is for is to try to get money down to the organizations that are serving those folks as quickly as possible with the least amount of strings attached, because the organizations will be getting the donations and they can spend it on anything they need to do to help the people they serve,” says Shimizu.

“We know that the three levels of government have promised different kinds of support … but it’s not clear when it’s all coming or how much will be received,” she adds. “The informal economy has really been decimated, and so things are dire in the neighbourhood.”

Response Team is also connecting organizations working on the front lines to support homeless people and people staying in shelters or privately owned SROs. In regards to food security, they’re collaborating with groups handing out daily meals, making food donations, and trying to get more kitchens up and running.

The Red Braid Alliance for Decolonial Socialism is also part of the grassroots movement to support the Downtown Eastside during the pandemic. One of its members, activist Tara Copperthwaite, says the purpose of the organization is to “help people that are having problems working their way through the system, homeless people, people on drugs, and people who need someone to speak for them or to help them out.”

Though she’s living in Maple Ridge, she used to be homeless and has spent a lot of time in the Downtown Eastside, where Red Braid Alliance volunteers are educating people about COVID-19 and connecting them to resources.

While she’s glad to see the handwashing stations, she also says the city needs to do more to help people living in the community.

“We’d like healthcare for all. No more work. Suspend all non-essential work with no loss of pay. Guaranteed sick pay for all workers, employed or not — ‘all’ including sex workers and people who work in economies such as collecting bottles,” she says.

Copperthwaite would also like to see the municipal government “suspend all rent, mortgage, utility, and loan payments and all evictions and foreclosures … open hotels and vacant buildings to people who need a home, and maintain the state of prisons, detention centers, and modular housing.”

While additional resources for helping the vulnerable and disenfranchised continue to roll out across all levels of government, residents of the Downtown Eastside continue to deal with the ongoing overdose opioid crisis, limited access to support, and unique hurdles to accessing the healthcare system. Increased government and grassroots support could help reduce the strain on the community and flatten the curve.

The Red Braid Alliance and the DTES task force are taking donations. Anyone interested in making a contribution can visit https://www.redbraid.org/ and https://dtesresponse.ca/