B.C.’s guidelines on accessing drugs safely seek to protect the province’s most vulnerable 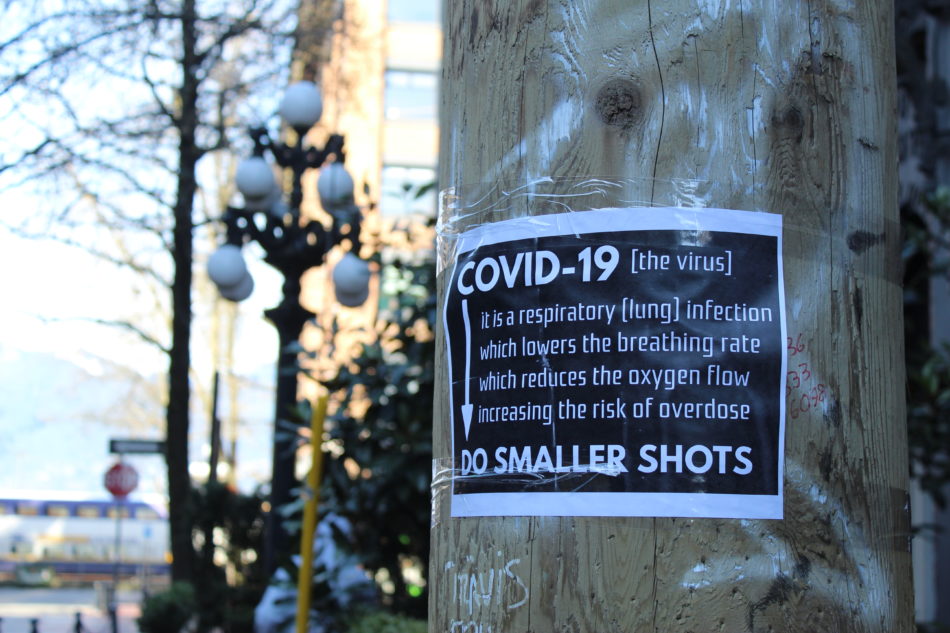 Posters have been put up around the DTES to educate people about the pandemic. (Aly Laube)

British Columbian policymakers are rushing to adapt as both the COVID-19 pandemic and overdose crisis  become increasingly harmful to vulnerable communities. As part of this effort, the provincial government has released a new set of guidelines and resources on safer supply which eliminate some barriers to getting prescriptions for opioids, stimulants, illicit benzodiazepines, tobacco, alcohol, and cannabis.

The hope is that the guidelines will discourage people from buying unregulated substances and encourage them to socially isolate.

“People who use drugs may have other health issues, including compromised immune systems, making them more vulnerable to infection and more likely to experience poor, potentially deadly outcomes related to infection,” reads a statement from the BCCSU.

“Additionally, many people who use drugs face multiple social and structural challenges that compound these vulnerabilities and prohibit following best advice around social distancing, isolating and other measures. These challenges are related, but not limited, to precarious housing and homelessness, food insecurity, and unreliable income.”

Under the new legislation, B.C. pharmacists are provided special clearance to extend, renew, and transfer prescriptions remotely. Doctors and nurses can verbally prescribe prescriptions, and pharmacy employees can deliver controlled substances to patients. These measures are meant to reduce the necessity of in-person visits to pharmacies and doctor’s offices, both for the sake of patients and health care workers. They are also meant to make it easier to acquire and use prescription substances safely.

B.C. Minister of Mental Health and Addictions Judy Darcy describes the guidelines as “world-leading.” She commends that they were developed by a diverse group of doctors, nurses, addiction specialists, frontline workers, and people who use drugs.

“Physical distancing … is not easy if you’re living in poverty, if you’re homeless, if you’re visiting a clinic every day in order to get your medications, or if you’re relying on an unpredictable illegal drug supply, so this guidance will make it easier for people who are at risk to both meet their requirements of distancing, while avoiding other serious issues to their own health and the community’s health,” she says.

Vancouver’s Downtown Eastside is a hotspot for both the COVID-19 pandemic and the overdose crisis. With large groups of people in close quarters on the streets and in shelters, COVID-19 could spread rapidly there.

Still, Darcy says it is only one of the communities being harmed by poisoned drugs in B.C.

“We certainly recognize that there are places where it’s really exacerbated, but it’s also important to realize that 80 per cent of the people who are dying are men of a certain age, and the majority of them are dying because they are using drugs alone at home,” she says. “We needed these more flexible options from the federal government to speak to all of those needs.”

“That’s still 981 people too many, but all of the work that has been done in the province was beginning to show results, and we need to continue on that path,” she says. “We’re very, very concerned that with the pandemic, we don’t want things to go in the opposite direction. We need to keep bringing that death toll down and we need to continue to flatten the curve.”

Garth Mullins is the host, writer, and executive producer of Crackdown, a monthly podcast about drugs, drug policy research, and advocacy efforts led by drug user activists. He’s also a member of the Vancouver Area Network of Drug Users, and is one of the people who helped create the new guidelines.

“They kind of say in the policy, ‘This isn’t for finding a way to get you off of drugs. This is to basically allow you what everybody else is, which is socially isolating.’ It allows you to basically use drugs … and social distance so you don’t have to score off your dealer every day,” he says.

While he’s happy to see the guidelines in place, he also sees it as a “first step” to further policy reform around safe supply across the country. Looking forward, he would like to see the policy made permanent, rather than ending once the COVID-19 pandemic is over.

“Some of the things I was pushing for made it in and some didn’t,” he says. “Like, I believe that you need to prescribe pharmaceutical-grade heroin, cocaine, and fentanyl — you know, fentanyl patches and stuff — because that’s what people are doing a lot of, and if we’re changing the rules we might as well do the thing that has the best proven track record.”

He also advocated for the broad eligibility criteria for safe supply outlined in the guidelines.

“If we make a great policy but then keep the door shut really tight so you can only get in if you meet 15 different things, then we wind up with a policy that sounds good but it only applies to a dozen people in B.C.,” he says. “I was hoping for a policy that could apply to anybody who’s a drug user in B.C. … and I think we have one now.”

Still, he has already seen issues with how eligibility is being determined by healthcare workers.

“I’m hearing of people not being able to access this because the doctors refer to the criteria and say, ‘Oh, you have to test positive for COVID in order to get this,’ and that’s not true,” says Mullins.

He adds that “some people are interpreting the policy as [existing solely] to address withdrawal symptoms, but it’s very hard to calibrate and prescribe so that it only addresses being sick.”

“I think that people should not worry about if someone’s actually getting high a little bit or feeling a little bit good on what they’re doing. That’s fine, that’s okay. In fact, you’re more likely to have someone not go to the illegal drug market if they’re feeling good on the prescription drugs.”

To healthcare workers who are worried about their patients giving away and selling their prescriptions, Mullins assures, “That’s going to happen. Don’t worry about it.”

“Whoever is downstream getting those pills is able to do something that’s safe,” he says.

“Right now, the drug supply is being affected by all kinds of things including border closures. The illegal drug supply is changing in Vancouver. What’s sold as heroin is getting more expensive. Stimulants like meth are getting rarer. The cost of cocaine, which is what crack’s made from, is going up, and this is just the beginning. We’re expecting to see more shortages, more price increases, and more random stuff to buff up or step on or mix in with the drug supply.”

He says that’s another good reason for people interested in accessing safe supply to take advantage of the new guidelines.

To learn more, Darcy suggests getting in touch with a healthcare worker through the overdose outreach teams and health clinics in the Downtown Eastside.

“Go to your doctor, go to your nurse practitioner or go to a rapid access addiction clinic, and if they’re not familiar with [the new guidelines], let them know about them. Bring a copy of them,” she says.

Health care workers and practitioners are encouraged to look through the BCCSU’s resources on risk mitigation in the context of dual public health emergencies. If you’re interested in talking to prescribers and pharmacists through the Vancouver Coastal Health Overdose Outreach Team, contact 604-360-2874 any day of the week from 8:00 am to 8:00 pm.