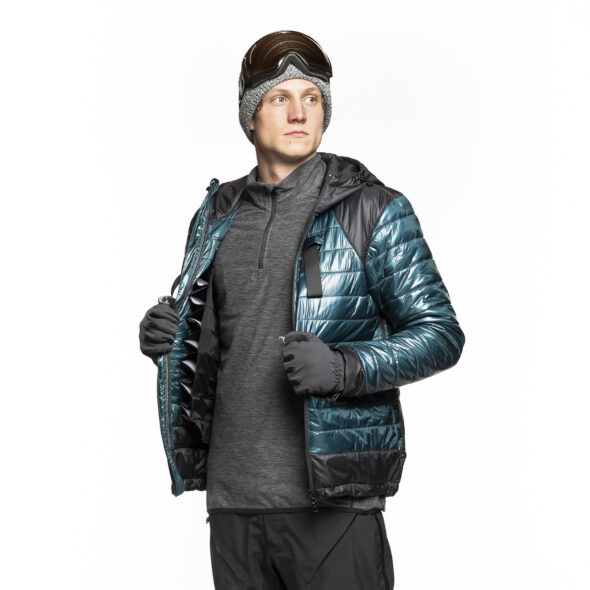 Riley Scott says that being recognized as the student runner-up for the sports and recreation award by Core77 was both surreal and exciting.

In mid-June, the Core77 Design Awards announced student and professional winners, runner- ups, and notable designers across the 18 categories judged. The award show has been highlighting excellence in design for nine years.

“I spent months and months of my life thinking about this every single day, and it was so validating having something like this say that my work was good,” says Scott.

His teal-blue and black jacket, named the STRATUS Ski Touring Mid-Layer, is now on its way back to KPU after the fashion show it was heading to was cancelled due to COVID-19.

Designed to adapt to the thermal needs of its wearer, the STRATUS eliminates the need for removing or adding layers mid-activity. Scott says his own annoyance on the slopes fueled the inspiration for his design.

“I always had frustration, or basically anguish, with de-layering and the time it took to de-layer, and the potential of being in dangerous terrain to change up the layering system,” he says.

By manipulating the jacket’s insulating panels, called baffles, the wearer can regulate the jacket’s core temperature. Scott explains that the baffle system was inspired by the design of window blinds, and can be adjusted in a similar way by tugging on the loops on the front of the jacket.

When in the open position, the air space between the baffles allows for a warmer wear as the insulation level increases.

The STRATUS also has adjustable zippers in the armpits, a cinchable hood, and thumb loops. Areas of the jacket that could be in contact with other items like gloves, helmets, and backpacks are covered with specific fabrics for more durability.

“It was a lot of trial and error and prototyping. It was amazing having the teachers that I had because they were extremely receptive to me bouncing ideas off them and helping me pick a direction,” Scott says. “[The process] took a lot of time, but it was so valuable in the end.”

He struggled to find sustainable materials for the jacket but later reasoned that he could simply ensure his product was adaptable and made to last. That way, users are more likely to wear it for years at a time and multiple activities, therefore reducing the amount of resources consumed long-term.

Still, he says “it’s difficult when you’re using super technical materials to find stuff that is either biodegradable or environmentally-friendly.”

Scott’s jacket was his capstone project in the Wilson School of Design’s Technical Apparel Design program, which he graduated from in December 2019.

This is the second year in a row that a student with this post-baccalaureate diploma has found recognition from Core77. In 2019, Philip Siwek won in the Strategy and Research category for student competitors with his cycling jacket designed to be more easily detected by autonomous vehicles.