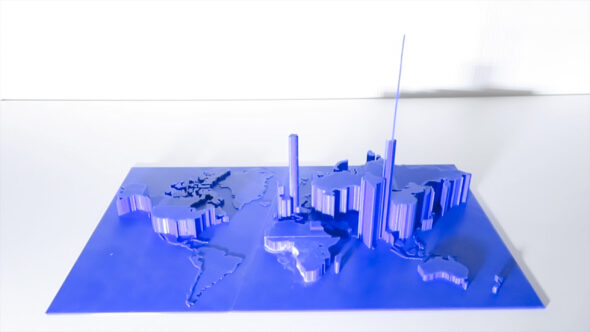 Since Kwantlen Polytechnic University history instructor Kyle Jackson began his research career, he has always been focused on addressing the misconceptions, stereotypes, and myths made about the Mizo peoples who lived in a mountainous region in Northeast India.

In June last year, Jackson and student research assistants Lucas Akai and Birk Zukowsky released “3D-Printing the Past,” a project that challenged stereotypes about this region in Northeast India that portrayed it as a remote or isolated area.

“It was labelled by colonial officials as remote, like a peripheral wilderness way at the edge of the world,” Jackson says. “Who’s defining this as Northeast when it is a centre for the people who actually live there? So my research career so far has been trying to challenge that.”

The history department and the Wilson School of Design at KPU collaborated to show the project through visuals to present the findings in an engaging and easy way for people to understand. The project was presented with the BC Historical Federation through YouTube last year, and posted on KPU’s history website a few weeks ago.

Each semester, the university offers a research and scholarship course to work with a faculty member who is initiating research projects. Jackson reached out to Akai to see if he was interested in working on this project.

“I was very excited to be part of the project,” Akai says. “This was the first time ever that I’ve done anything to this at all.”

Jackson and Akai went through a collection of newspapers called the Mizo leh Vai Chanchin that were published between 1900 to 1939 and written in the Mizo language. As they were reading, they began to wonder how global the news coverage was and how readers perceived other places around the world.

Akai then used software to “scrape” the text from the newspapers and break the 1.6 million words by language and the frequency of specific words like countries and places used in all documents.

The most challenging part was gathering the data and putting it into a readable format, Akai says.

After Akai gathered the data from the newspapers, Jackson talked to the Wilson School of Design to see if a student could show the data in a visual way instead of a spreadsheet. He applied for the Teaching & Learning Innovation Fund, which helps financially support various learning projects at KPU, and hired Zukowsky shortly after.

Zukowsky took Akai’s data and transformed it into a 3D map by extruding “the heights of different countries, correlating to the amount of times the countries were mentioned.” For example, Germany was referenced 1,232 times in the newspapers, so the height of the country would be larger than Canada, which was mentioned 48 times. He says the project took around 60 hours to complete.

Although the project is over, Zukowsky says it’s important to share this project with the KPU community to show what different facilities can do when collaborating.

“It can show just how easy and fun it can be to work cross-disciplinary within KPU,” Zukowsky says. “But what you see is, it’s a tangible thing that you walk by, you can see it, and you’re so intrigued.”

“Overall, the map should be taken with a grain of salt, admitting that there’s always problems with research like this,” Jackson says. “[But] those cross-faculty collaborations … can enrich both disciplines so much on a personal level, it can enrich your life.”

Rabbits overcrowd shelters when they are abandoned

Beyond the Match: Raptors fans have lots to look forward to in the young core

Phoney toonies and you