Gurbaksh Dhaliwal is not happy with the KSA – and he’s wearing his concern on his sleeve. In a unique form of protest against what he sees as the current KSA council’s double standards in event planning, he’s chosen to wear traditional clothing from his home country of India in the hopes people approach him and ask him why he’s doing it. As the KSA’s international students liaison, the president of the Kwantlen International Students Society and the vice president of the Kwantlen Sikh Students Association, he’ll likely answer a lot of questions. 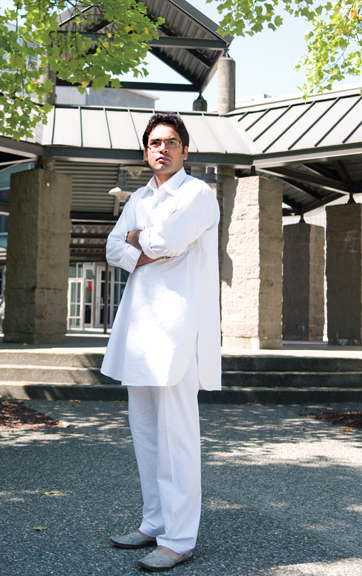 Gurbaksh Dhaliwal is wearing his traditional clothing around campus to voice his displeasure with the KSA. KRISTI ALEXANDRA / THE RUNNER

In April, Dhaliwal wanted to plan and host a Vaisakhi event at Kwantlen for students on Surrey campus. He approached the KSA, but was denied funding. Instead of Dhaliwal’s plan, KSA executive members decided to take part in the larger off-campus Surrey Vaisakhi event.

Dhaliwal decided to pay out of his own pocket and put the event on himself. “It was my money and my friends’ money, who supported me,” he

said. The event cost between $300 and $400. According to Dhaliwal, he’s only heard excuses: “oh, you didn’t get the proper documentation, you didn’t give us enough paper work.”

He says he’s upset that he was denied without being given a chance to provide any additional quotes before his idea was quashed.

Harman “Sean Birdman” Bassi, president of the KSA, said in a written statement, “The liaison was asked to obtain more than one price quote so that the society gets the best price. He refused to shop around stating that his friend assured him the best priced product and if he asked someone else it would be ‘disrespectful’ to his friend. The events director did not accept this argument as due diligence would not be performed. The liaison was again asked to get more than one price quote, refused to do so, and left the meeting. We have not heard anything since. The liaison can bring this issue to council [this] week if he chooses to do so.”

Dhaliwal is concerned that while ordinary students are required to account for every penny that they plan to spend, other events that council or executive are taking initiative on aren’t under the same scrutiny. Council spent $3,500 to rent tables and hand out food at the Surrey Vaisakhi event. At the time, student senator Christopher Girodat questioned why the KSA was spending hundreds of dollars renting when they already own both.  He says he was told the it was a package deal.

So Dhaliwal decided to put on his traditional dress. “I’m doing my part,” he said, “generating awareness about what’s happening here.” Dhaliwal wants people to become interested in what he has to say and look into how council is operating. “There’s no democracy,” he said. “They’re saying ‘it’s not our event, it’s not happening.’”