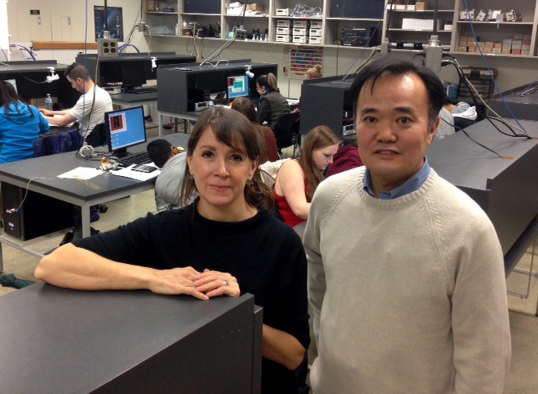 Kwantlen Polytechnic University students taking Introductory Physics (PHYS 1100) next semester will for the first time have the option of taking the lab portion of the course online from the comfort of their homes. A program being piloted for the spring 2017 semester will see students operating lab equipment located at North Island College via a web based platform. This will be the first time the technology has been used in Canada despite being developed right here in British Columbia.

Students who opt for the online section will complete their lab assignments on their computers, rather than coming into class. Their actions will control robotically operated lab equipment at the North Island College Remote Web-Based Science Laboratory. Students will be able to see their results in real time via webcam.

“The only difference compared to a regular lab that you do on campus is the distance between you and the equipment,” says KPU physics professor Dr. Takashi Sato, who is running the course.

According to Sato, the lab sessions for this pilot course will be exactly the same as the other Introductory Physics labs held locally on campus. KPU labs on campus offer all the equipment and amenities of the North Island College lab. However, it’s very feasible that this system could be utilized in the future to offer KPU students access to resources not available locally on campus.

Sato says that the key advantage of this online lab section, over its more traditional in-person counterparts, is the accessibility it offers students who may have trouble traveling to campus to complete the labs. Offering the ability to do lab assignments from home fits with the KPU’s goals of providing open education.

This remote lab system offers students a more realistic lab experience than they would be able to have using a virtual simulation of the conditions of a real physical lab. According to Sato, realistic simulations are very hard and expensive to make, but reality actually turns out to be a lot more straightforward.

“The experience in the lab that we want students to have is to see what it’s really like to operate the equipment,” says Sato. “There’s some quirkiness that comes with physical experiments that, in a simulation, may be kind of smoothed away. We want students to encounter [that quirkiness] so they can learn the skills to overcome that.”

The technology for these remote labs was developed at universities right here in British Columbia over the past several years through BCCampus, a provincial government organisation that promotes innovation in open education. A similar system, known as North American Network of Science Labs Online, is based on the B.C. program and is already being utilized on a trial basis across several institutions in Colorado.

This coming semester at KPU, the classroom portion of Introductory Physics will still be taught on campus face to face with Dr. Sato. Sato says the Physics department will consider offering a fully online version of the course in later semesters.

“The class is on campus this time because we’re taking things one step at a time, but the vision is that the entire course will go online,” says Sato. “That’s really the point of it. We want to offer flexibility to students.”