Healthcare Privatization is Not the Answer 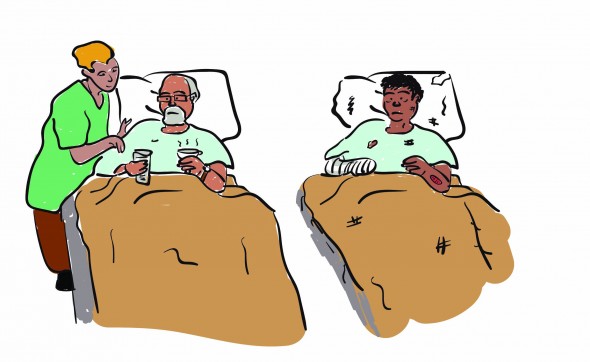 The Supreme Court of B.C. is hearing a charter challenge from Dr. Brian Day, who says that Canada’s laws preventing doctors from practicing publicly and privately are in violation of the Charter of Rights and Freedoms and should be repealed so that Canadians—or at least those who can afford it—can have better access to healthcare that they deserve.

Day, who owns the Cambie Surgery Centre in Vancouver, cites the increasing wait times for those who are seeking medical aid as a sign that publicly-funded healthcare is failing British Columbians, and that the best way to remedy this is to introduce a system that enables wealthier people to buy their way into skipping the line. This creates what’s called a two-tiered medical system, which is similar to the system that the States and some European countries have. Essentially, unless you have the tens of thousands of dollars it takes to buy your way into the top-tier, you’re out of luck.

The crux of Day’s argument is that doctors should be able to set their own prices for treatment and exceed the limits that are currently being imposed by Canadian medicare laws. He wants doctors to be able to charge more for their services without a cap, and argues that this is somehow going to benefit Canadians in the long run. As a man who owns a for-profit private health practice, Day would most certainly stand to make much more money if he were to get his way, and isn’t even trying to conceal the conflict of interest this creates.

It’s hard not to picture the good doctor cheerfully twerking on a table surrounded by the Canadian wealthy elite, brandishing their mad stacks of bills by making it rain. Maybe he’ll finally be able to afford that bejewelled and gold-encrusted stethoscope he’s always wanted, or maybe he’ll take a celebratory trip to Ottawa, and fulfil his long-held fantasy of popping a bottle of Cristal Brut and pouring it on Tommy Douglas’ grave.

Perhaps, in his arrogance, Day is truly unaware of the obvious self-interest in his cause and really believes that he’s fighting the good fight on behalf of all Canadians. Even if that were true, his audacious claim that prohibiting doctors from hiking up their prices somehow offends the basic human rights of all Canadians is just too absurd to escape scrutiny.

Healthcare is a basic right, and giving doctors more power to interpret and arbitrate patients’ access to it doesn’t seem to be like the optimal solution to the problem. The varying European models of private-public hybrid healthcare systems seem to work in their own way, but the private sector of healthcare in Australia has caused an increase in patient wait times for public healthcare because doctors are beginning to devote more time to the patients who pay more for their medical services. Who can blame them? Monetizing aspects of their profession provides an obvious incentive for them to increase their focus on these patients

The Canadian healthcare system hasn’t faced a legal challenge of this variety since the Chaoulli case in 2005, when someone with more money than patience and their totally not self-interested physician decided that it wasn’t fair that they couldn’t use private health insurance to pay for public health services. They lost, and universally accessible healthcare survived in Canada. Healthcare is to be distributed according to each citizen’s need, not their ability to pay their way through. This ideal transcends the growing forces of income inequality, prejudice, classism and judicial partiality that is present in so many other aspects of life in this country, and it should be preserved for the good of all Canadians, regardless of wealth.