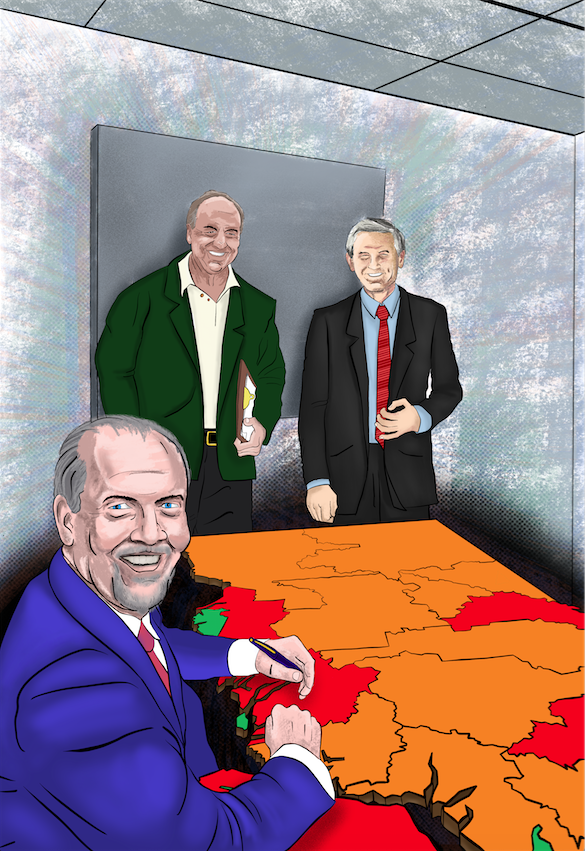 B.C. residents of legal voting age will be able to participate in a referendum to decide whether the province should keep its current electoral system or adopt a new one from Oct. 22 to Nov. 30.

The referendum will be decided via mail-in ballots, which Elections BC is distributing to registered voters until Nov. 2. Starting on Nov. 3, people who are not registered can ask for a voting package by calling Elections BC, using their website, or by visiting a Referendum Service Office, which will be open across the province starting Nov. 5. Voters will have until the end of the month to complete their package and send in their ballots.

The packages will ask whether B.C. should keep its single member plurality electoral system, also known as first-past-the-post, or switch to a system of proportional representation. If the recipient votes in support of the switch to PR, they can move on to the second question, which will ask voters to rank their preference out of three styles of proportional representation: dual member, mixed member, or rural urban proportional.

“A proportional representation system in its purest form says that the percentage of the popular vote is translated into the same percentage of seats in the legislative assembly,” explains KPU political science instructor Dr. Valérie Vézina.

Educating voters about the differences between these systems and how they work is a challenge, she says, because PR voting ballots are more complicated than FPTP.

“It’s not as easy as marking an X next to somebody, as we currently do in our single-member plurality system,” she adds.

To help students make informed choices, the Kwantlen Student Association is handing out educational materials on all KPU campuses during the referendum period.

“We will be letting students know that they can vote, letting them know about the three different systems, and registering students to vote,” says KSA President and VP External Caitlin McCutchen. “I hope everyone—not just students, but everyone—votes.”

McCutchen says that she supports PR because she believes a government that reflects a higher diversity of interests might benefit students by granting them more representation in policy making decisions. However, she also admits that, when it comes to specifics, “it’s going to be hard to see until the system changes.”

So what might these changes look like? Depending on the outcome of the referendum, one of the three proposed electoral systems could be implemented, with the details being worked out afterward by a legislative committee.

Under this kind of proportional representation, British Columbians would be represented by two types of MLAs: district and regional. The district MLAs function the same way as current MLAs do, representing a politically-defined local area. Regional MLAs represent larger geographical areas that contain multiple districts. Under this system, an independent commission would re-draw the electoral boundaries between current ridings, making them larger, and would decide where to designate the regional boundaries.

Ballots would prompt voters to choose one of their preferred district candidates. Depending on the legislative committee’s decision, they may also be given an additional vote towards their preferred party. This would give voters some flexibility to be more discerning in both local and provincial politics.

For example, if a voter supports the Liberal Party’s platform, but likes their district’s Green party candidate more than the Liberal candidate, they could have the option to vote for both without having to compromise.

Once the votes are counted and district MLAs are elected, regional MLAs are chosen based on a separate list of party candidates. They would then be assigned to the number of seats that the party received, making it proportional to the total number of votes cast in its favor.

Scotland, New Zealand, and Germany all use a form of MMP, either nationally or on a sub-national level.

DMP works similarly to our current system, except that most ridings are combined with neighbouring ridings to form larger districts, and each of these new districts is represented by two MLAs instead of one.

On the ballot, people vote for their preferred party, which includes either one or two candidates. These districts have first and second seats; the first is filled with the lead candidate from the party that received the most votes in that district, and the second seat is filled with either a candidate chosen to represent one of the other parties, or the lead party’s second candidate if they did particularly well in that riding.

DMP was invented in Canada, though it has not been implemented anywhere as of yet.

Voters rank them in terms of their preference, and after the votes are tallied, the candidates who most frequently rank first on people’s ballots are elected to a seat, as long as the amount of votes they receive passes the minimum quota.

The idea behind giving urban districts a different electoral system is to better reflect the range of political opinions that can exist in densely populated communities.

Even though PR is designed to make the Legislative Assembly of B.C. more representative of the popular vote, critics note that it can have a number of drawbacks.

Vézina says that, in countries that use PR systems like Belgium or Germany, the government typically works more slowly to pass laws or policies because of the increased diversity and subsequent need to compromise. This can also enable parties with extreme views to gain more representation than they would under FPTP.

According to Vézina, a big challenge for those who support student representation in government is increasing voter turnout and participation, especially among younger people.