After proposing the idea to students and faculty, KPU was met with backlash 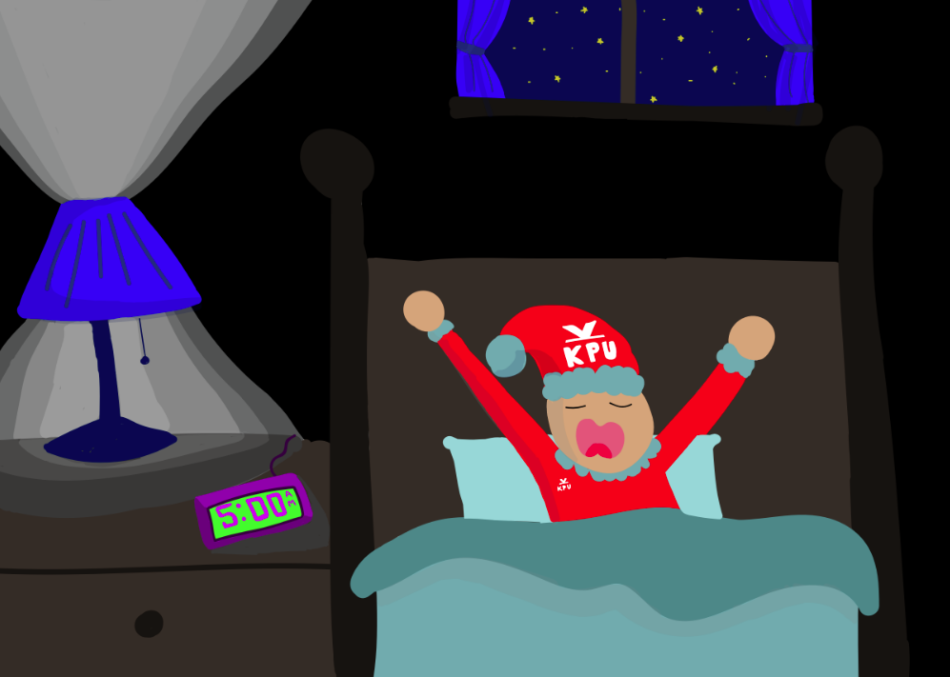 Some people are morning people. Early risers, fortunate souls who have not just a tolerance, but an affinity for the first hours of the day when the air is brisk, the coffee is warm, and the world is enveloped in tranquility. It can be a challenge not to assume that these people are completely insane, or that they have stumbled into some kind of supernatural power that the non-morning people have yet to discover.

For some of us, morning is the bleakest time of day. We leave our beds begrudgingly, unable to properly function without an IV injection of caffeine, consigned to being in a surly mood for a few hours—especially in the depth of winter when you’re laboriously scraping the ice off your car’s windshield in the dark like some kind of frigid, angry peasant. So when KPU proposed implementing an extra block of classes that start at 7:00 am, there was some predictable backlash. The idea was met with opposition after the university posted about it on its policy blog, accessible to faculty and students.

It’s understandable to suppose that an extra block of class time could benefit a small subset of students who either need to take classes that early due to schedule conflicts, or who would like to be able to leave school earlier so they can work in the afternoons. There are an unlucky few of us—especially students enrolled in programs with fewer faculty—who have been unable to take required courses because of time conflicts and were unfairly forced to wait for the following year’s intake to begin.

But there are a number of problems with early classes that will inevitably arise for some students. One of the most bemoaned aspects about attending KPU is that its campuses are only accessible by commute due to an absence of student housing. For students who rely on transit, this is just part of the deal. However, the campuses are so spread out that commute time can vary quite drastically.

Imagine a student who lives in Richmond needing to arrive on the Langley campus before 7:00 am. If they’re lucky enough to be able to drive, they would only have to endure an approximately 40-minute commute, depending on traffic. On transit, however, the commute time increases by an hour, meaning that students would need to leave their homes just after 5 in the morning to get to class on time.

Arguably, this situation wouldn’t be common, but I personally know some students who commute from cities as far away as Abbotsford or North Vancouver who would have completely unreasonable commutes to get to school. Alongside extracurricular activities and work, this situation seems absolutely untenable.

Nobody can be expected to be at their best in the classroom after waking up at 4:30 in the morning, and it would potentially be imposing a disadvantage on some students who can’t live closer to campus. Students are stressed as it is, and a lack of sleep is already a concern for their mental health.

Other critiques posted on the policy blog mentioned how unpopular the 8:00 AM class blocks already are, and how instructors anticipate minimal turnout for them. Some challenged the university to provide concrete evidence that the decision would benefit students in general. People also pointed out that the summer semester has free space for adding classes, and suggested that KPU administration should look there for introducing new blocks instead.

It seems unlikely that administrators will move forward with this decision because of these reasons, but if they do, they had better do it carefully and thoughtfully. Right now, it looks like a hasty new policy where the pros are heavily outweighed by the cons. Making a decision like this could seriously impact a lot of students, so KPU should sleep on it first.