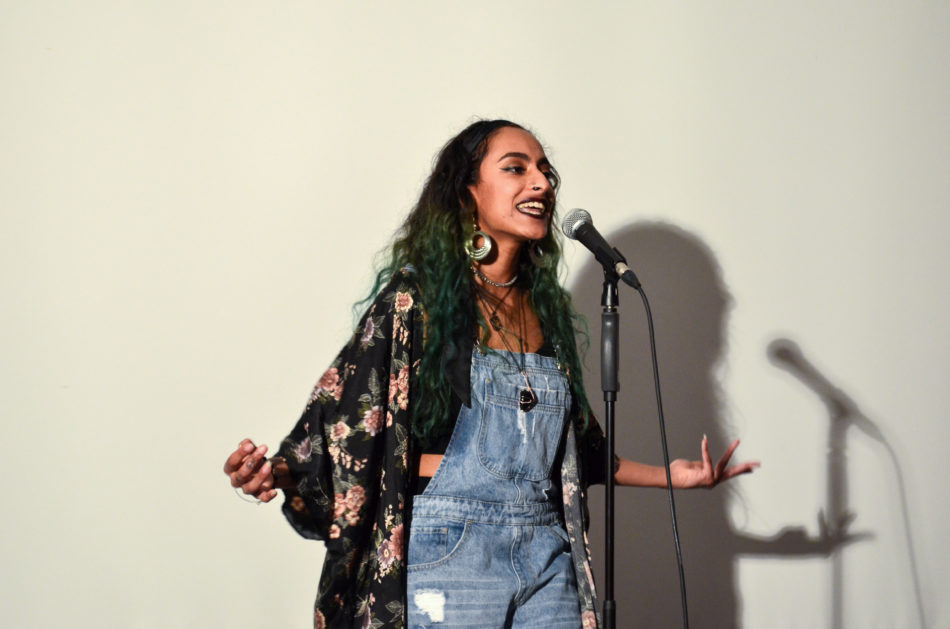 Franz the Poet doing “the thing with the words”. (Kristen Frier)

Six poets who identify as South Asian femmes performed together for an evening of spoken word which took place at KPU’s Surrey campus on Feb. 20. In this context, “South Asian femme” refers to female-identifying or female-presenting folks whose heritage comes from countries in or around the Indian subcontinent.

Focusing specifically on poets of these identities is what fueled the Kwantlen Creative Writing Guild to hold the event.

“We never take the time to get to know the specifics,” says Tawahum Bige, the primary organizer for South Asian Femme Poetry Night. “I think that’s a white supremacy thing, to separate into whites and everyone else.”

Artists who are BIPOC—Black and Indigenous People of Colour—face regular tokenization and marginalization. In an attempt to add diversity, event coordinators will often cherry-pick artists from marginalized backgrounds to include in their otherwise white-dominated events. This means that these artists often miss out on the opportunity to work with others who share their identity.

“I think having events that celebrate the specifics is so valuable because it helps us to look at ourselves and each other in a different light,” says Sofia Waqar, one of the six featured poets who performed at the event. “It’s another step towards appreciating differences instead of oppressing.”

Chelsea Franz, a KPU creative writing student who performed during the first half of the evening, found the experience to be particularly enriching. She describes a lifetime of rejecting her heritage in order to assimilate with her non-South Asian community members.

“On stages, [marginalized] poets sometimes carry the burden of representation,” says Franz. “Usually there will be one or two BIPOC folk on a panel, if ever, and it was nice to have a whole event just celebrating this South Asian Femme-ness.”

Franz, who is one of the organizers of Slamapalooza, KPU’s slam poetry team, also discussed how sharing a space with so many poets who have experiences that are similar to hers gave her the freedom to better explore her identity on stage. 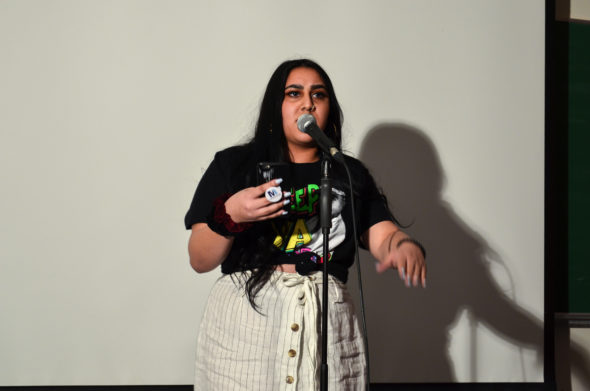 “It kind of relieves that pressure of speaking for all South Asian femmes,” she says. “Instead, you get to share your story just to share it, and not to educate other people. Because of our shared experiences we all just kind of understand each other.”

After a short intermission, Naaz Sidhu, an 18-year-old KPU Faculty of Arts student, used her stylized rhythmic poetry to reset the momentum. Sidhu’s work was described by one of the other poets there, Kiran Shoker, as “particularly charging” because of what she represents to the South Asian femmes of tomorrow who are still growing and changing.

“I grew up in a house where my mom was the boss. She ran the show, but while having a strong presence she was also soft,” says Sidhu. “In the South Asian community, I’ve found women are the heart and soul of everything. I also find that women are the ones that are quickly silenced when they speak their mind.” 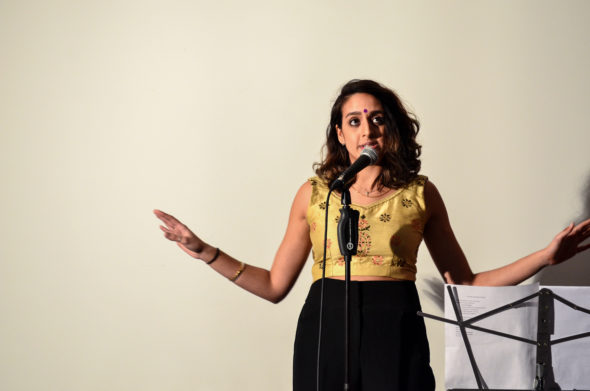 Shoker was the final poet to take the stage that night. Her worked touched on empowerment, self-decolonization, and the role of South Asian women who are, according to Shoker, “caged in a cycle of physical and emotional violence that spans generations, where voices are not heard as we are oppressed in roles of submission.”

Bige expressed interest in continuing to host events like this one in the near future. Keep an eye on the Creative Writing Guild and Slamapalooza for more on-campus spoken word.